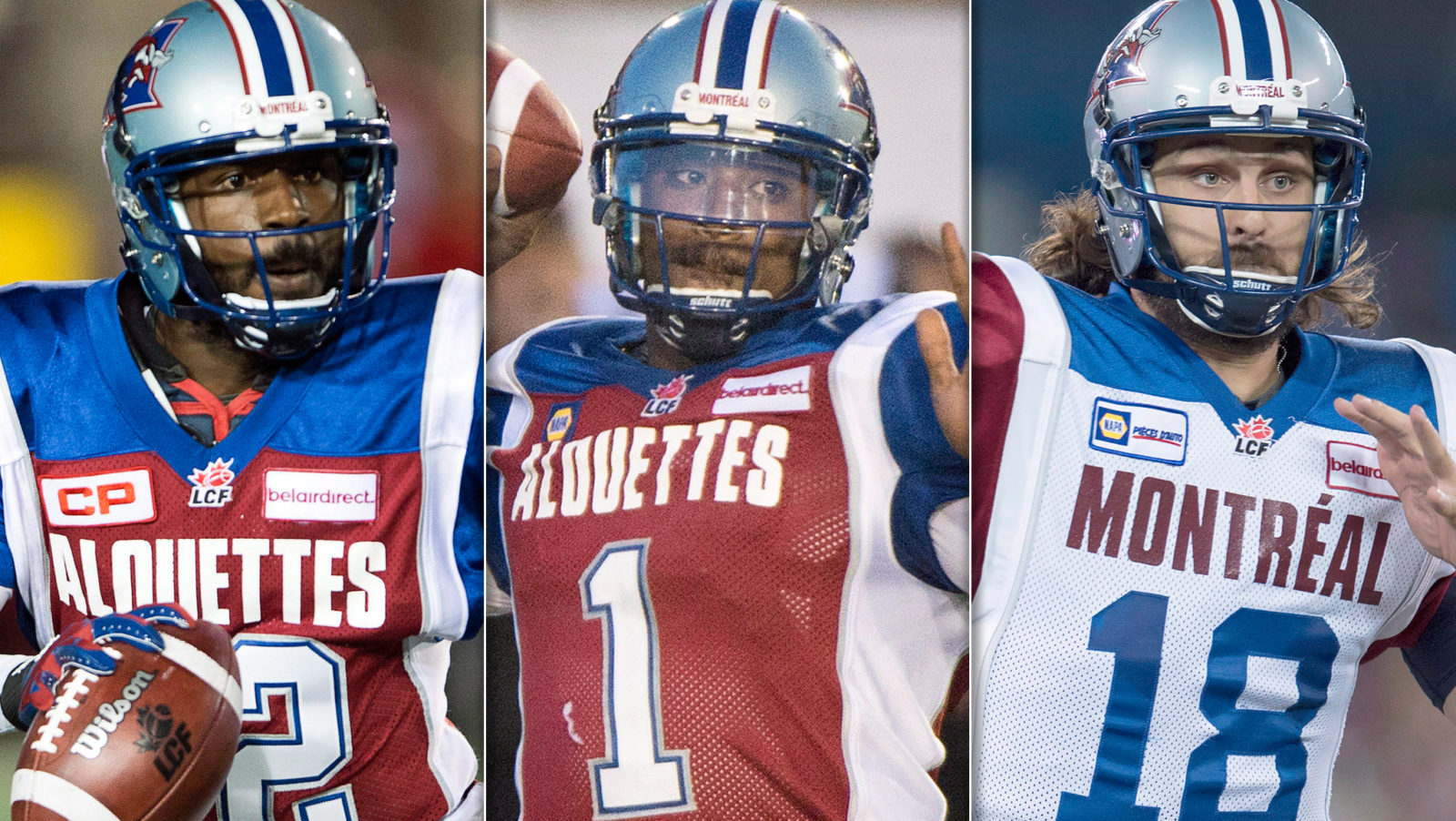 The Montreal Alouettes’ trade for Johnny Manziel is not just about what has gone wrong offensively with Montreal this year. Yes, they are last in points scored, touchdowns, total yardage and first downs gained, but the Manziel acquisition goes far deeper than 2018.

You can trace the roots of this trade all the way back to Week 8 of the 2013 season. In a 24-21 loss to the Saskatchewan Roughriders, Anthony Calvillo had to leave that particular game with a concussion. He would never play another down of football again.

For 15 years Calvillo was the ultimate safety blanket for the organization. No matter what happened with the roster or with the coaching staff, there was Calvillo cranking out 5,000 yards season after season keeping Montreal in the mix for the Grey Cup just about every year. Since then Montreal has been looking for that next quarterback. Since the beginning of the 2014 season the Alouettes have gone 26-51 with just one playoff win. Of course, finding the next Calvillo is just about impossible, but over the past five years Jim Popp and now Kavis Reed have failed to find anything even remotely close.

RELATED: MORE ON MANZIEL
» Manziel eager to build camaraderie with new team
» O’Leary: Als believe Manziel can elevate teammates
» Als acquire Manziel in blockbuster deal
» Sherman: ‘This has to work, and it will work’


I went on a pretty depressing rabbit hole of Alouettes quarterbacks from 2013 to Manziel and I’m left with one overriding thought: Please let Manziel be the answer! Even if it is for only a couple seasons, I’d love to see someone under centre who can excite the Montreal crowd because they deserve it. Since that Calvillo injury it has been a parade of failed NCAA stars, retreads, aging veterans and a whole bunch of players you have never heard of and will never hear from again.

Before I continue with what will be a snarky second half to this column, let me state the obvious: every one of these “failed” Montreal quarterbacks that I am going to talk about is a success story. To make it as far as the CFL means you dominated at the collegiate level, and there’s a good chance you were drafted into the NFL or at least spent time in a training camp with an NFL squad before coming north of the border. That is a hell of an accomplishment when you consider just how many other high school and university quarterbacks are out fighting hard for the same dream.

My point is these guys have all accomplished so much. Now, onto poking fun of professional athletes by a guy who, beyond running a bunch of marathons, has zero success in team sports!

Troy was supposed to be the face of the franchise after Calvillo. He was the Heisman Trophy winning quarterback from Ohio State who put up gaudy numbers as a Buckeye (54 touchdowns vs. 13 interceptions) and just looked like he could dominate in the CFL. Smith did win his first start in a Week 17 matchup against Hamilton, but in retrospect that may have been the high water mark for him.

Troy began the 2014 campaign as the team’s starter but the team got off to a 1-5 start, averaging just over 16 points per game. Smith was placed on the six-game injured list. Despite all he did in the past, Smith was never an accurate passer, usually struggling to complete even 50 per cent of his passes.

Another quarterback with a productive past at a major NCAA school, Brink holds multiple career passing records during his years at Washington State. Brink got a chance after Troy Smith was benched, but he only lasted two games. Well, I’m sure he was given the quick hook because the team had the next big thing waiting to go, right? Uhhhh…..

The answer to that question is no. Crompton did manage to have a decent 2014 season as he helped get Montreal to a 9-9 record and even a 50-17 playoff win over the BC Lions. Sure, you could give most of the credit for that post-season win to a running game that produced 215 yards and a defence that forced three turnovers, three sacks with the majority of the Lions’ points being scored in garbage time behind some quarterback named Travis Partridge.

I have never heard of Travis and I’m guessing he wasn’t very good because he doesn’t make it on this list. I mean if you can’t get a cup of coffee as a quarterback with Montreal between the years 2013-18 than you really need to take a long look in the mirror and get your real estate licence. As for Crompton, like so many passers on this list, injuries got the better of him and hindered any chance he had of building on his 2014 season and he was out of the league by 2017. On a positive note, check out this picture of him. His hair was fantastic!

Tanner the Good: In 2013 he passed for 329 yards in a game and helped set up the game-winning field goal in 39-38 win over the BC Lions the week after the Calvillo career-ending injury.

Tanner the Bad: In 2015 against the same Lions Marsh had one of the worst statistical nights you’ll ever see, throwing for just over 100 yards with five interceptions in a 25-16 loss.

The best thing I can say about him is he shares the same name as Anthony Calvillo. Moving on.

Just such a fun quarterback back in his days with Clemon, Boyd was a First-Team All-American in 2012. Boyd follows in that proud tradition of athletic quarterbacks who were also productive passers in school who end up being duds in the CFL. I like to think of him as a really poor man’s Troy Smith.

I don’t care how many times he gets pulled by Chris Jones in Saskatchewan, Bridge would represent a massive improvement over anyone currently on the Alouettes’ roster. Bridge only threw 40 passes for the 2015 Montreal Alouettes in what should be remembered as one of the greatest “worst” seasons by any collection of quarterbacks.

Did you know that year Montreal saw seven quarterbacks throw at least one pass! That has to be some sort of record. Of course, to be fair, Dan LeFevour only attempted one pass, but hey, it still counts.

The last Montreal quarterback to register a road win has returned to the Alouettes. Vernon did lead the team to three straight victories to conclude the 2016 season. Now the cynic may scoff at that feat as the team was 4-11 at the time so there really wasn’t much to play for beyond pride, so the pressure/expectations were at a far more manageable level — but wins are wins (sort of).

Fun fact I found from a recent Herb Zurkowsky Montreal Gazette column is that Adams is the shortest quarterback Mike Sherman has ever coached in his entire career. 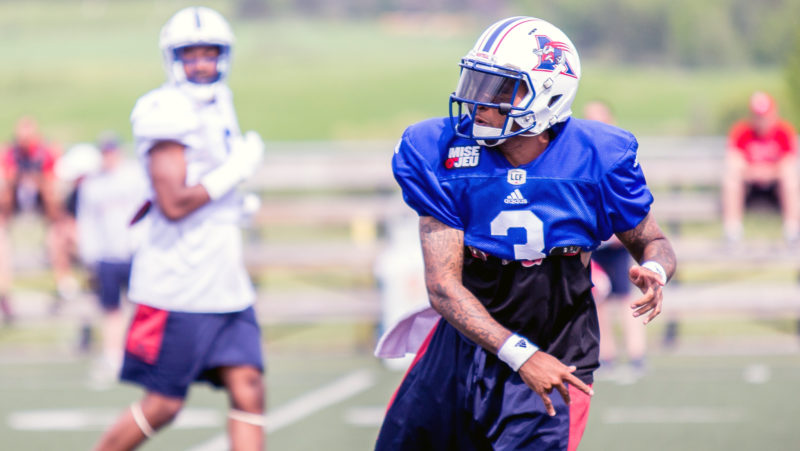 After a year away, Vernon Adams Jr. is back on a crowded Alouettes QB depth chart (Dominick Gravel/Montreal Alouettes)

To be honest I have no idea how Carden made this list. But according to CFL.ca he has two carries for two yards so there’s that.

The worst thing I can say about Cato is that if you click on his name on the Alouettes’ official website, you get a “Page Not Found” screen staring at you. The best thing is that Cato owns the Calgary Stampeders! Early in that magical 2015 season where everyone got play quarterback for Montreal, Cato went off for 241 yards, completing 80 per cent of his passes with three touchdowns and zero turnovers in a 29-11 win! He did it again in 2016, winning 17-8 over the mighty Stamps albeit at the end of the year in a game in whcih Bo Levi Mitchell did not play. But why let facts get in the way of our Cato feel good moment?

Let’s round out the “Veterans Division” of this column with Glenn’s two forgettable seasons in 2015 and 2016, in which he saw action in 12 games. The only reason he was even there is that Kevin is contractually obligated to play on every CFL team. Look out Halifax, Glenn is coming soon!

His one year in Montreal was the only season he threw for more interceptions (16) than touchdowns (15) in his career. Can we all just collectively agree this season never happened and that Durant was not part of a three-win Montreal team?

We know this is going to end badly, right? I mean with Willy’s luck, the arrival of Manziel, and the curse that is Montreal, something bad is going to happen to Willy. Run while you still have time and don’t look back!

Let’s ignore the failed third down conversion against Calgary this past week (Don Landry did a great job covering what happened) and focus on the fact that Shiltz was born four days before ‘A Few Good Men’ was released. I remember watching that film at the Sherway Movie Cinema in Etobicoke, Ont. which no longer exists. I feel old.

His first year with the squad and Mathews is already out for about a month with a foot injury. Feels about right. Welcome to the team, Jeff!

All right Johnny let’s see what you got.