Buono chose sports over trouble, and never looked back

Buono chose sports over trouble, and never looked back

Thinking of the journey that his family made to Canada, Wally Buono admits that sometimes he forgets everything that went into it.

“People today don’t realize and I don’t either,” he said. “I don’t realize the risk, the courage, what it would take for people like my mother and father to come from a country like Italy and come to Canada.

“Just the culture shock in the winter, just in the weather, but obviously they had a lot of courage because coming to a place where you can’t speak the language, where you don’t necessarily have a skill set, you come knowing that you have the will to work and hopefully (you’ll get something).”

Buono was just 13 months old when his father and his uncle left their family in southern Italy.

“My understanding at that time if you worked I guess you got stamps, and you got so many stamps on your book over a two-year period or something, you were allowed to sponsor your family,” Buono said.

“They must have done that, because my mother and brother and I came over from southern Italy in 1953. We took a boat from Naples to Halifax and then the train from Halifax to Montreal.”

Like many first-generation immigrants, the Buonos’ start to their life in Canada was a hard one. Wally was nine when his father, a construction worker, died in his sleep. It took his mother years to get on her feet and in the meantime, Wally and his brother stayed at the Shawbridge Boys’ Farm, in Shawbridge, Que. The farm doubled as a roof for wayward or orphaned children and as a juvenile detention centre. 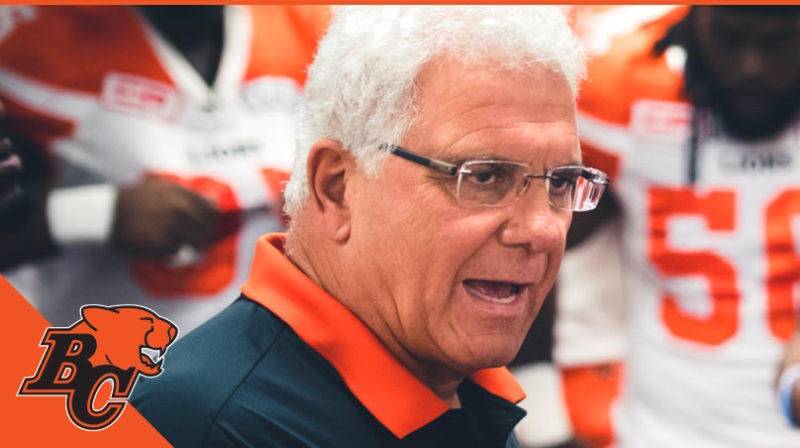 “He was our coach, then he went to the University of Kentucky to play football and he played for the Alouettes for a number of years. He’s the one that mentored us and kept us on the straight and narrow, as far as sports.”

That set Buono on the path that brought him to the present-day. After a collegiate career at Idaho State University, he spent 10 years as a linebacker for the Alouettes. In 1983, he began his coaching career, with a move to Calgary that turned into a 12-year stay as head coach and GM. He went to BC in 2003 with the same titles and as the Lions head coach this year, will retire at the conclusion of the season.

Living in Vancouver, Buono sees the blend of people and cultures that make up this country. He sees something similar when he looks at the teams he’s coached over the last four decades.

Taking a wide swath of people from different walks of life and getting them on the same page, trying to win a Grey Cup, Buono said, is the best part of working in football.

“(Take) an Odell Willis, very charismatic, very lively very much enjoys life. Then you have a Gabe Knapton who is very intense, who’s very committed and physical but doesn’t say quite as much but still has a very positive effect,” Buono said.

“Then you see a guy like Joel Figueroa, a big kid from Miami that has a certain presence about him. They’re all totally different but their diversification in who they are helps you to build your team and build your chemistry, which is critical to success.”

It’s an idea that Buono sees carrying over into everyday life, too.

“The story of individuals like myself, who their family or their fathers or mothers who sacrificed everything to give you an opportunity. We all get opportunities, everybody has opportunities. Some make more of it than others. Some appreciate it more than others.

“I say this to my kids, I say it to the team. Opportunities will come to everybody. Not everybody makes the most of the opportunity that comes to you. When that opportunity comes, be ready. If you’re not ready, you’ve got nobody to blame but yourself. I think this country has been built on people who have had opportunities and they’ve made something with it.

Buono took his opportunity and blazed a trail that the CFL will never be able to duplicate.