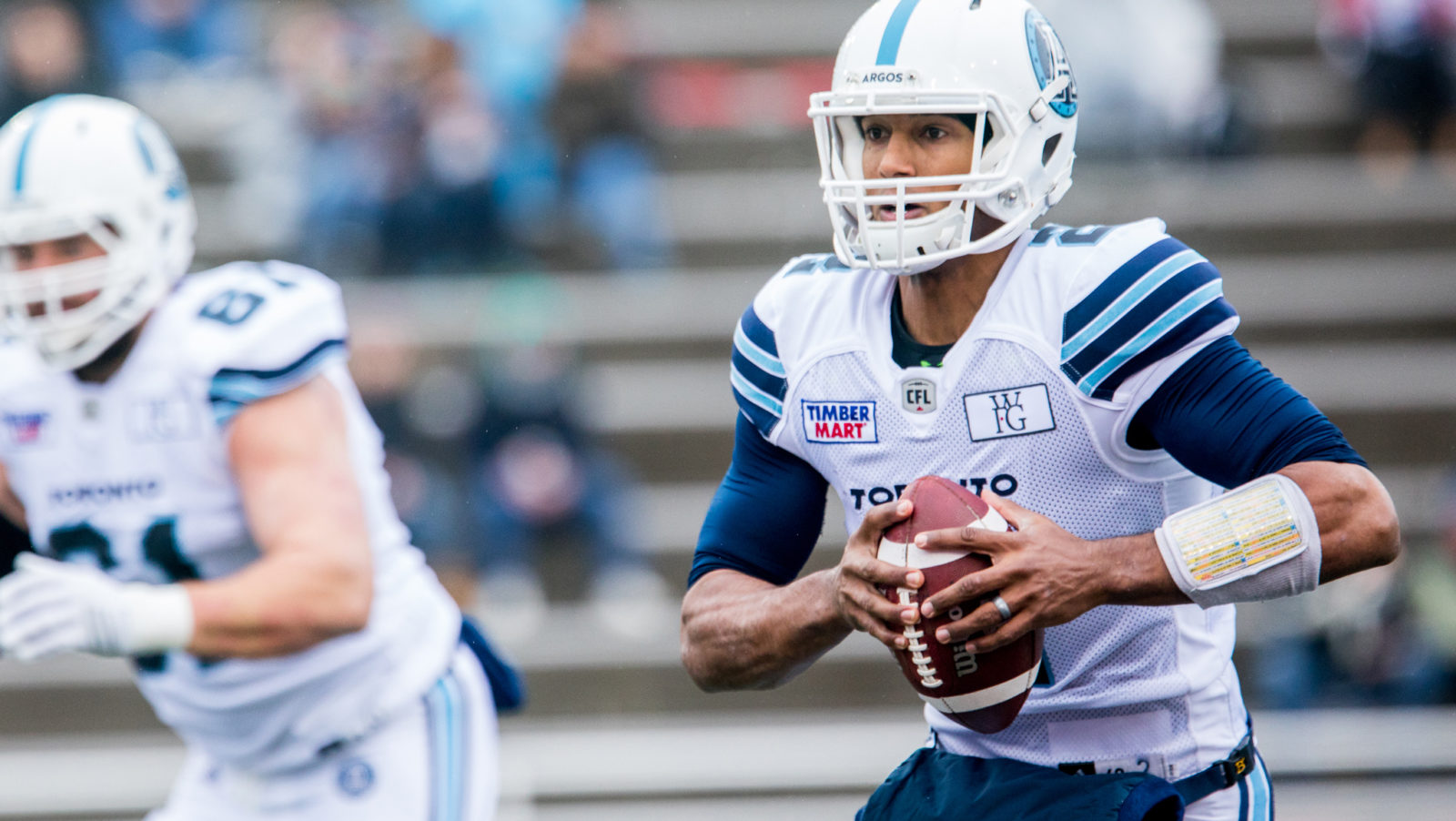 TORONTO — It’s a scenario Jim Popp and the rest of the Toronto Argonauts know quite well.

Two years ago the Argos and their new general manager shocked the league, going from last in the CFL one year to capturing an unlikely championship the next.

After a forgettable four-win season in 2018, the Boatmen now hope history can repeat itself.

Despite the retirement of fourth all-time leading passer Ricky Ray, the outlook is positive surrounding this year’s rendition of the team, which made some eye-opening upgrades in the off-season.

Shawn Lemon, Micah Awe and Tobi Antigha headline a new-look defence with a familiar face in defensive-minded Head Coach Corey Chamblin. And on the offensive side of the ball, James Franklin will try to justify his top-prospect billing with a little help from highly-touted free agent acquisition Derel Walker.

Can the Argos rise with the tide in a division that’s there for the taking? Let’s start with the offensive side of the ball: 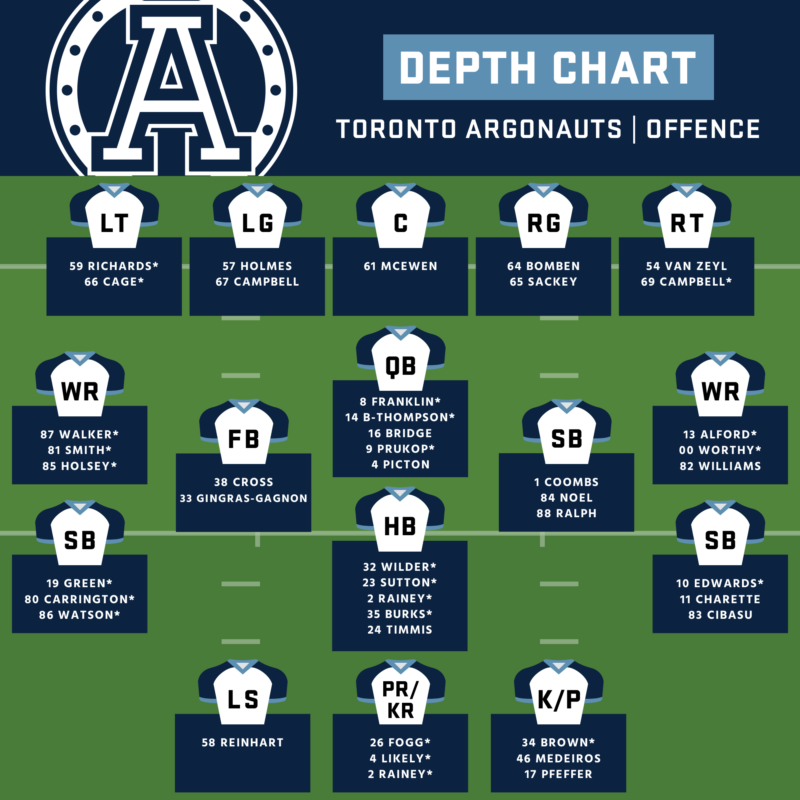 On the surface, the Argos’ hopes rest on the shoulders of projected starting quarterback James Franklin. Once considered the league’s top QB prospect, things didn’t go Franklin’s way last season when he was benched twice and threw more interceptions (9) than touchdowns (8). It was a frustrating season for both Franklin and the Arogs, but the 27-year-old must turn the page quickly. The No. 1 job may be his to lose this training camp, but veteran McLeod Bethel-Thompson and free agent addition Brandon Bridge could push for playing time.

With a change at offensive coordinator and an upgraded supporting cast, Franklin could have more help this season. Free agent signing Derel Walker has been one of the most productive receivers in the league the last four years, averaging 85.9 yards per game over 49 contests. His rapport with Franklin from their time in Edmonton could play to the Argos’ advantage this season. S.J. Green and Armanti Edwards provide a veteran presence on the offence, while the true wildcard could be national pass-catcher Anthony Coombs, who missed 16 of 18 games a season ago.

While the receivers are more dynamic, the running backs are deeper. James Wilder Jr. is lethal as both a runner and a receiver, while veteran Tyrell Sutton, Canadian Mercer Timmis and dynamic returner and receiving back Chris Rainey were added to the depth chart. Branden Burks, still just 25, had a strong rookie season with a team-high 6.29-yard rushing average on 45 carries. Early deficits handed the Argos negative game scripts throughout much of last season, but the five-yard rushing average has to improve in 2019.

There’s not much to write about on the offensive line as it’s one of the CFL’s most consistent and reliable. The Argos are primed to start four Canadians once again, as Sean McEwen and Chris Van Zeyl anchor a unit that allowed just 38 sacks on 681 drop backs in 2018. Eventually, though, the hope is that 2019 first overall pick Shane Richards will push for playing time. Whether that’s as a tackle or guard is up in the air.

There’s no doubt the Argos’ offence must improve in 2019, but fans are excited about a defence that’s projected to take a significant leap: 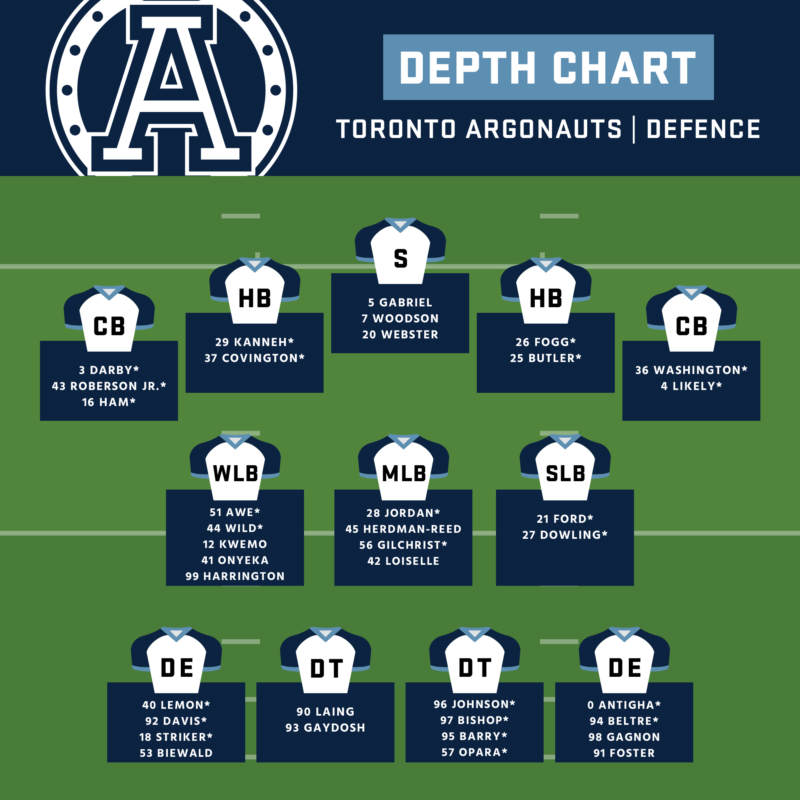 Despite an inconsistent offence, the defence was the heart of the issue in Toronto in 2018. Personnel changes, injuries and the departure of Corey Chamblin all contributed to a league-high 406 yards allowed per game (tied with Montreal), often putting the offence in difficult situations — especially with injured Ricky Ray on the sideline. With Chamblin back along with some big-name free agent signings, the defence could return to its 2017 form when it ranked near the top of virtually every statistical category.

With a coach that brings plenty of pressure, don’t expect a repeat of the Argos’ season-low 24 sacks in 2018. Shawn Lemon headlines the Argos’ defensive acquisitions this off-season, returning to the Boatmen after recording 10 sacks in 13 games following an early-season trade to BC. Opposite of Lemon, former Riders defensive end Tobi Antigha should get every opportunity to become a full-time starter. In the middle, national Cleyon Laing gets good pressure for an interior lineman, while Poop Johnson can both plug up lanes and apply pressure.

Bear Woods, who turned 32 in January, was just released on Thursday after being limited to just four games last year. He was a veteran presence in the middle of the Argos’ defence, opening up a critical position battle in training camp. One of the team’s marquee off-season additions in Micah Awe could replace Woods in the middle or suit up at WILL. The 25-year-old is a hard-hitter with plenty of room to grow entering his third CFL season.

If the Argos are looking for more competition, they’ll find it in the secondary. Quadarius Ford, sidelined for almost all of 2018, is battling for a starting role, potentially at SAM linebacker. Alden Darby, Kevin Fogg and Abdul Kanneh are all proven veterans expected to start, but Trumaine Washington (23), Will Likely (24), Devin Butler (24) and Marcus Roberson Jr. (26) could all be in the equation.

We’ve seen what Corey Chamblin’s defences are all about. An aggressive, pressure-oriented attack could reveal a different Argos team on both sides of the ball — a necessity if this team is going to compete in the East.