There was a time when one of the best kept football secrets in the country existed in the birthplace of Canadian Confederation.

Holland, not the country but the College with the same name, has an infatuation with the sport of football. Publicly funded, and with an enrolment of about 2,400 full-time students, the school is located in the vibrant city of Charlottetown.

With the College celebrating its 50th anniversary, and located on picturesque Prince Edward Island, it’s quite likely that very few people west of the Maritimes know that the school has won four Atlantic Football League championships in the past 10 years.

But the success on the gridiron, and from a sport used to attract students, hasn’t come easy.

As a Community College, Holland has had a few disadvantages. In addition to competing against university teams, where players are often a few years older, another significant disadvantage is that the College offers two-year academic programs.

So, coaches for the football Hurricanes are left with turning over 50 per cent of the roster in a short span of time.

And one more consequential factor, Holland, though appealing to students from around the world, has had its share of individuals who not only want to be active in physical education but, in many cases, are new to this sport of football.

“We look at athletics from a business perspective, football brings a big profile and we have found it attracts students from all over,” said Albert Roche, Holland’s Athletic Director and thrilled the Maritimes could be getting a Canadian Football League team.

“For Holland, at first, it was somewhat of a risk starting a team – and there was some feeling that we wouldn’t survive if we relied only on students from Prince Edward Island.

“We have students from the Bahamas, Mexico and Africa – just a few of the locations. Some who come here, know football, some do not. And so, time is spent teaching the rules and giving them opportunities. It can be a huge challenge.”

Javier Fernandez, who resides in Playa del Carmen, not far from the Mexican tourist area of Cancun, played for his high school team. The only international exposure to football that he received came from watching games that were played across the border in Texas.

Nicholas Lindo has a different story.

He’s from Mathew Town in the Bahamas, and while packing his bags travelling from the islands of the West Indies to the Maritimes, it can be a bit of a culture challenge. He has never played football – but watched National Football League games on satellite television.

Fearless and indomitable, Lindo and Fernandez, along with others, have made life-changing decisions by leaving home for new opportunities.

“I chose Holland College because it had an Engineering program that was appealing to me and the school was on an island where it was quiet and I could focus on my education without the distractions you find in the bigger cities,” said Lindo.

Just 18 years old, Lindo was one of the older players on the Holland roster. Of the 77 players who showed up for training camp, 24 were 17 year olds. The final cut out of 60 players included 12 international students. 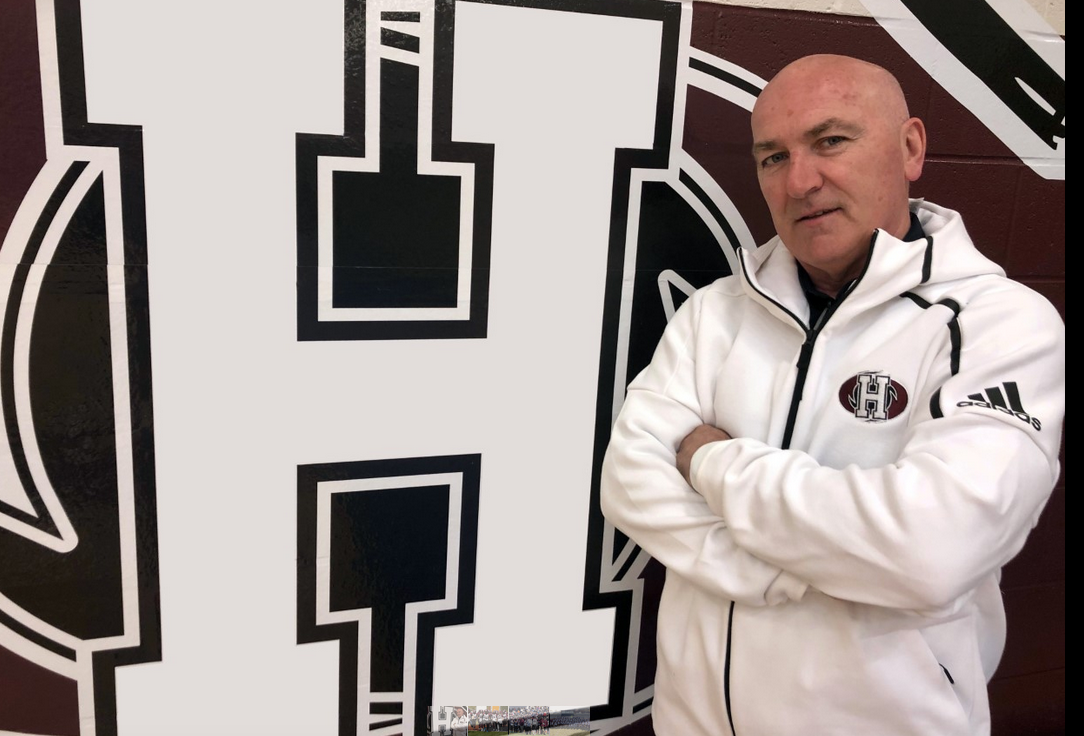 Originally from Ohio, Steve Letner has been a coach at Holland for the past five years. He was an assistant when the school won two league titles before being appointed head coach last year (Holland College).

As an academic whiz, Holland also benefitted in that his tuition and accommodation remain covered through a scholarship from a Nassau organization that financially assists students with strong academic backgrounds.

On the gridiron, Lindo adapted quite well, in his rookie season last year, as an offensive lineman. Now, in his final year at Holland, Lindo, having dieted to drop 30 pounds and tips the scales at 250, will switch to the defensive line – something, he hopes, will get him a spot on a university team.

That’s because his future is focused on pursuing a degree and, if his name comes up, a chance to play professional football in Canada.

As for Fernandez, also jovial and optimistic, his connection to Holland came via a trip to initially study in Toronto. He couldn’t deal with the big Metropolis and, in a discussion with a friend who, coincidentally was heading to Holland, chose to tag along. He claims the excursion was a positive move, one that made him “feel like home” and in a smaller community.

“Back in Mexico, my plan was to study in another country – and, hopefully, continue to play football while getting my education,” said Fernandez, who has fit in well as a linebacker on the Holland roster.

“It worked out very well – an amazing experience. The course is very good and playing football – I just had to adjust to the Canadian rules. For me, the hardest part was coming from the warmth of Mexico to the Canadian winter and cold.”

Showing an eruption of excitement, when pushed with thoughts about playing pro, both players say they’re hoping to follow in the footsteps of Nigerian-born Kay Okafor who also played football at Holland. Okafor then shuffled off to St. Francis Xavier University, and is now an offensive lineman with the Hamilton Tiger-Cats after being selected 21st overall in the 2017 CFL draft.

Originally from Ohio, Steve Letner has been a coach at Holland for the past five years. He was an assistant when the school won two league titles and, when appointed head coach last year, took the team to the league final before losing to Dalhousie. 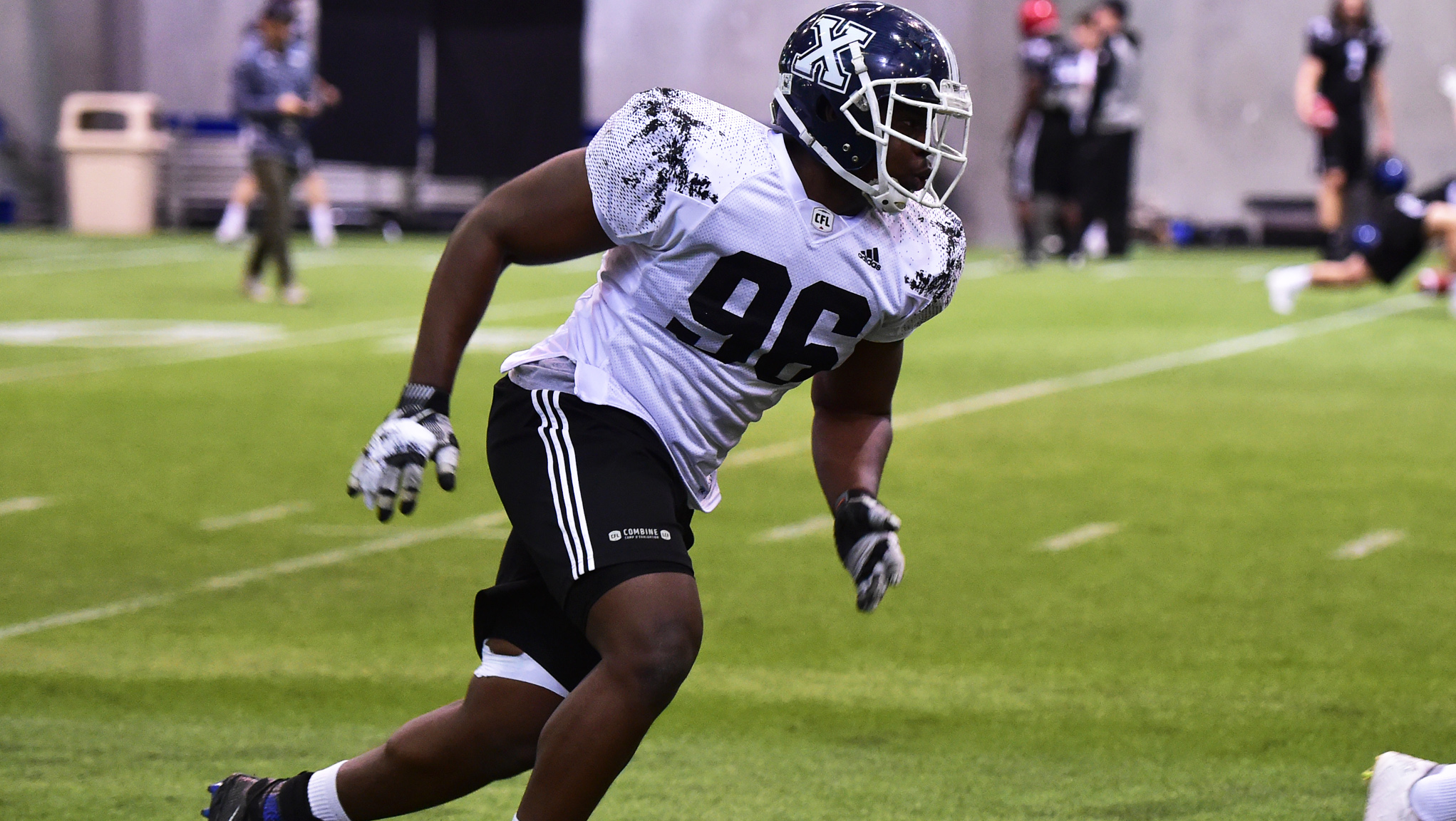 Nigerian-born lineman Kay Okafor is living out his dream of playing pro football for the Hamilton Ticats and is a Holland College and St. FX grad (CFL.ca)

“Holland is the only non-university in the league and that has been tough,” he said. “We’re now starting to attract older students, those who don’t want to go to university and instead are pursuing careers in the trades. Many of these students are also good athletes.

“The way I see it, we’ve been privileged to get guys with raw talent and we’re able to transform them to become good athletes. Players like (Fernandez) and (Linto) have put in the extra work. They’re committed and focused, and we have, and continue to have, great success.”

“Look, I can’t build a four-year program, like the other teams in the league, so I’ll do the best, and will take a kid with character over athleticism. Our top priority at Holland is to get students ready for what lies after Holland – and if we can give them a great football experience while they are here, that’s a bonus.”