It may have been in a classroom, down a hallway or just outdoors, when Gord Randall and Caden McTaggart were both chronicling the likelihood of doing something never done before in the history of Sullivan Heights Secondary in Surrey, B.C.

Starting up a football program.

At the time, the margins were impossibly slim – but Randall, a part time teacher then, and McTaggart, a student inching closer to graduation, never wavered from their intention.

Soon to celebrate 20 years since the high school first opened, Sullivan Heights is one of the most crowded and diverse schools in the Greater Vancouver Area. While it has been rich in programs pertaining to the performing arts, absent was a gridiron team.

Over the years, students had professed their allegiance to a variety of physical activities that included cricket, soccer and the contact sport of kabaddi, popular with the Punjabi community.

It was when Randall joined the fulltime teaching faculty a few years ago, that McTaggart, who had already been recruiting interest, knew the dream of a gridiron squad was becoming closer to reality. 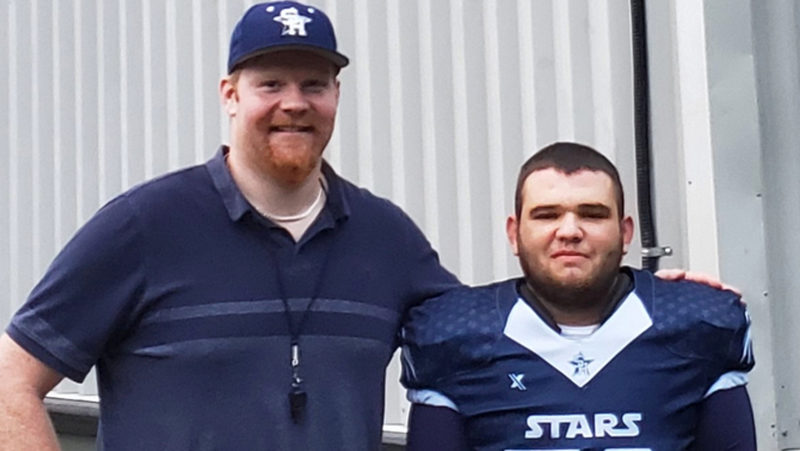 As Randall recalls, school Principal Raj Puri, an advocate for sports, wasted little time asking Randall, now a permanent member of the teaching faculty, to form a team, and take on coaching duties. He assured him, that administrative support would come – and Randall said about $60,000 was allocated for start-up costs.

Football, for the first time according to Randall, was alive at Sullivan Heights.

So much so, that the school, signed up 65 students, launching a foundation with Varsity and Junior teams.

There were also several obvious observations: the majority of students had never watched a football game while a large group was new to playing the sport, and had some jitters learning the rules.

But perseverance, valiant efforts, motivation, as well as a thirst for learning and having fun, overtook the problems. It was all about trying something new.

Sullivan Heights, its teams nick-named the Stars, had an interesting debut in 2018.

The Junior squad compiled an impressive 4-5 record while the Varsity team was a little out of sync, failing to win in nine starts. The older players could only score a mere 20 points against established teams in the British Columbia Secondary Schools Football Association.

Playing in the provincial league, with some 25 schools divided into Eastern and Western Conferences, in some cases, required significant travel and expenses.

“That first year was overwhelming, eye-opening in many ways, but we had to start somewhere,” said Randall, a former grad of Queens University, where he was an offensive lineman for the Kingston, Ont. team that won the 2009 Vanier Cup. 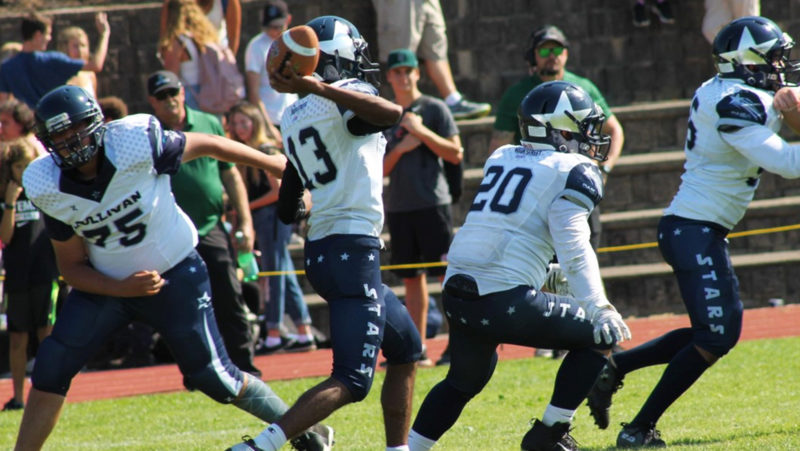 “We made announcements, went looking for kids in hallways – especially those who had some physical size. It came down to being ambitious, doing things the right way with the ultimate goal of seeing the kids have fun – and it helped knowing that there were also about 12 kids with playing experience of some kind.”

While financial support was a challenge, fund-raising was crucial. Randall said one major corporate sponsor pitched in $15,000 while Sullivan Heights searched for shoulder pads and equipment at crosstown schools that no longer had programs. Helmets were safety-checked, certified and painted as the team established colors of navy blue, silver and white.

McTaggart, chosen captain by his teammates, had objectives that went beyond winning.

“For me, it was all about establishing a team, the culture, the experience and representing your school,” said the 6-foot-3, 175 pound pass receiver. “High school football is hurting out here, some teams are folding and there’s a lack of interest. So, I just wanted to see the sport thrive at my school.”

Having contributed to the birth of a new program, McTaggart has since graduated and is attending the University of Fraser Valley. He’s also playing for the Langley Rams of the Canadian Junior Football League.

Others have stepped forward to carry on the school mission of “nurturing a community of learners who will be prepared for a lifetime of healthy living and life long learning.”

It’s also something quite important to Kelly Swart, the mother of a 14-year old on the team.

“Football, more than anything, has helped my son in many ways,” said Swart. “There’s something about it – and, maybe, starting with teamwork and responsibilities. I’m a big believer that it’s not all about academics, and there are consequences if school work is not done, but I have always encouraged Joshua to try – it’s all about learning.”

As a frequent spectator at school games, she’s aware of injuries.

“The first time he got hit, my heart skipped a few beats – but I have seen some pretty bad injuries in other sports,” she said. “I trust the coaching staff and I’m happy my son is having fun.”

“That first year was overwhelming, eye-opening in many ways, but we had to start somewhere.” 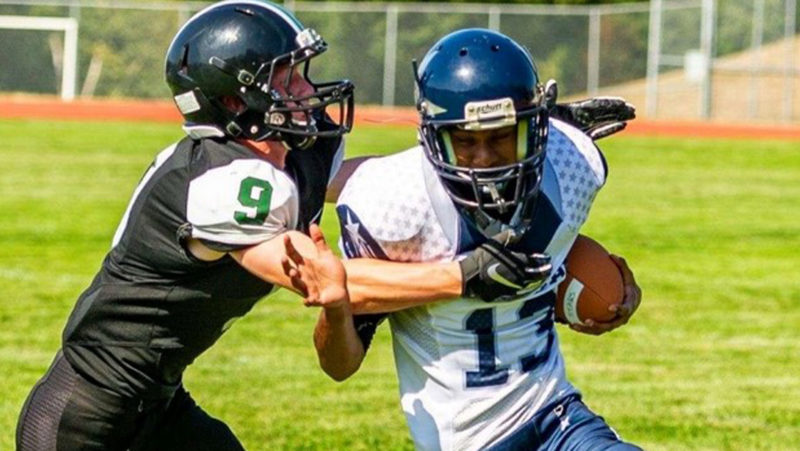 Jordan Prasad is a 15-year old quarterback and, in his rookie year, scored 10 of the teams 14 touchdowns on the Junior squad. Prasad adores the physical game and said the odd bruises, to him, are a ringing endorsement that he’s working hard to learn and get better.

“I started playing flag football in grade 8, but when the opportunity was there to try something knew, I grabbed it,” he said. “My parents are very protective, come to watch me play and when I get tackled, I give them the thumbs up that I am fine.”

As for 16-year old Curtis Medeiros, whose family came to Canada from the Azores, the archipelago in the Atlantic near Portugal, school chatter about forming a team was enough to perk his interest.

“I thought it would be fun and, actually, liked the challenge of going up against more experienced players,” said the 240-pound centre. “I always give it my best shot, build momentum and it’s just another way of seeing that hard work can pay off.”

Meanwhile, Logan Dring, a grade 11 student had a bit of a dilemma. He comes from a family of rugby players, but chose to take the leap to football when the school couldn’t rally enough support to form a rugby squad.

“I like contact sports and find it to be a big stress reliever from studies,” said Dring, who was one of the top teenage defensive junior football players in British Columbia last year. “I got off to a rough start and put the shoulder pads on backwards, then couldn’t get the helmet on. Things got better quickly and I find that football is taking over my life in a positive way.”