It was game day excitement with some jitters thrown in, too.

Two under-12 age football teams met, the objective was to win – and the challenge, to implement a game plan, focus on scoring opportunities, avoid penalties, and hold the opposing team to fewer points.

The anxiety and fidgeting, this time, had nothing to do with the players, but more about something that involved five individuals about to make history – and in a long anticipated welcome sight.

Indeed, there was something fascinating, and quite unique in this game, that occurred just south of the Assiniboine River in Winnipeg. It happened on the gridiron at Corydon Community Centre, where the two Atom Division squads were about to play.

The quintet of game officials stepping on to the field, wearing the traditional black-and white stripes, were all women. 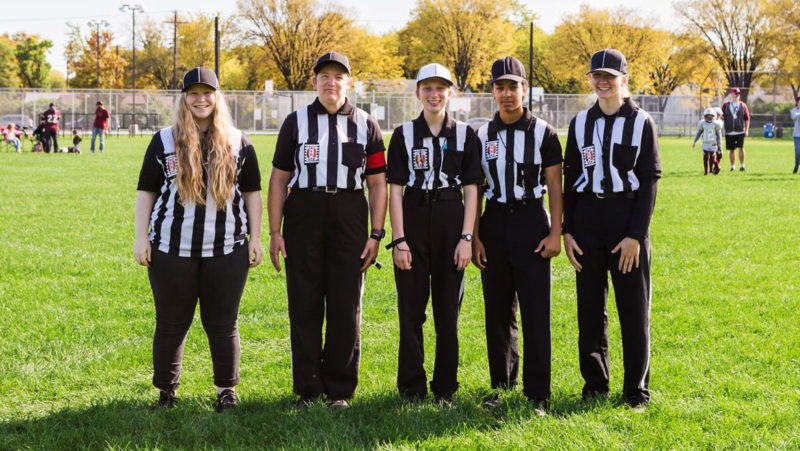 In Manitoba, and quite likely in an exclusive for Canada, this was the first time an all-female crew officiated a football game.

A few days before the game, Don Van Achte, the President of the Manitoba Football Referee’s Association, contacted the officiating crew, one by one, and informed them of their assignment. With on-field experience already on their resume, it was time for an all-female team.

The initiative had been in the works, thanks to a summer conversation with David Low, President of the Manitoba Minor Football Association as well as Football Manitoba Executive Director, Bill Johnson, and Van Achte.

“Trying to make change to something that has been around for awhile can often be one of the toughest things,” said Low. “It’s time to get with the times, show how inclusive we are and understand that football has evolved tremendously.

“This is not 1950 anymore, we’ve also come a long way since the days of leather helmets. The old boys club (of officiating) isn’t an old boys club anymore.”

With Low, Johnson and Van Achte well aware that the number of women playing the contact game continues to rise in their province, interest was also evident in coaching as well as other aspects of the game. For officiating, the time was right to try something new.

Van Achte agrees that there is nothing wrong by creating positive opportunities for everyone.

“It’s too early to tell about community reaction, but I’m excited, and so is our Executive,” said Van Achte whose group of 45 officials includes 11 women. “When women asked to get involved, we thought it would show a sign of being progressive. I like it and it would be nice if this happens across Canada.”

Kennedy Molloy, studying at the University of Winnipeg, had the Referee’s white cap for the significant and memorable game. Krista Paradowski was Umpire. Lauren Horvath had the assignment of Line Judge while Aashanti Tshiovo got the nod as Field Judge. Timekeeper duties were the responsibility of Kaitlin Cummings.

Football runs in the Molloy family. Her mother started a football club and her father has coached. Even her older brother is an official, but yet to wear the white cap.

“When I got the assignment, I didn’t look closely at the crew,” recalled Molloy, who later received a call from Van Achte with the names of the others. “At first, I thought it was exciting, overwhelming with an all-female crew, but then realized, a game is a game and we all have a job to do.”

Molloy said she’s not one for intimidation. Apparently, the message was received, as only five penalties were called in what observers called an action-packed, well-played game.

“Football is what I enjoy, I’m always prepared and will imply the rules of the game as well as be tough and lenient,” she said. “People, and that includes coaches, need to understand that if you have the certification to do the job, then women need to be accepted.”

“This is not 1950 anymore, we’ve also come a long way since the days of leather helmets. The old boys club (of officiating) isn’t an old boys club anymore.” 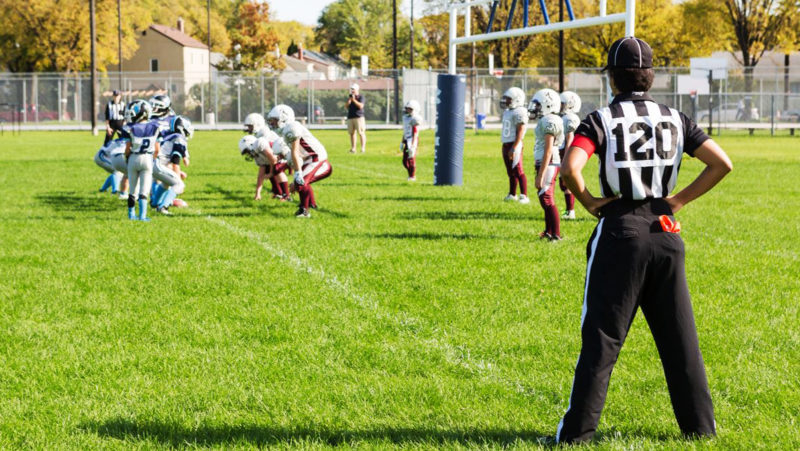 Tshiovo knows all about football, having played, coached and now officiated. But she admitted to being a bit anxious and edgy.

“I was nervous, with all the attention, but I had a good officiating crew and we approved that anyone, once qualified and understanding of the rules, can do it,” said the 16-year old who took the advice of her mother, two years ago, and learned how to become an official. “It’s a great feeling being part of this and I do it for fun. Then, after the game, to get appreciation from coaches who came by to shake our hands.”

Cummings has been associated with football for nine years and, back in grade 9, was a top-notch school wrestler.

“Football has become No. 1 for me,” said Cummings. “I have taken courses and studied officiating and when I put on my jersey, I trust my ability, what I have learned and am just thrilled that administrators are providing women with opportunities to officiate.”

For Paradowski, in addition to being the oldest member of the historic crew, she has some solid support from her husband, a seven-year CFL veteran.

“Oh yes, there are times when the discussion around the dinner table focuses on officiating and likely now with more women involved in games,” said Paradowski, who enjoys officiating seven to 16 year olds. “They may know us as officials, but we’re more teachers of the game, giving advice along with warnings of how to play, follow the rules and have fun.”

Horvath has witnessed stereotyping in sport and so, when the opportunity came to officiate, she put away her competitive Highlander cultural Scottish dancing shoes, and turned to football gear.

“Players and coaches have an oath to respect officials – and we can make mistakes, but I’ve also been called out, too, for not throwing a enough penalty flags,” said Horvath. “There are times when you hear comments from the spectators, but you keep your work face on, focus and, when it happens, ignore the profanity.”