That’s the town on the outskirts of St. John’s, Newfoundland.

Meet Keegan Sooley, the 16-year old who has huge expectations and is fortunate, in many ways, starting with his determination to shine at whatever he believes in – from education to football.

And then, there was that accident, at the age of 12, that had Sooley at Janeway Children’s Health and Rehabilitation Centre, for a few days, recuperating from an assortment of injuries that included his right leg, a broken ankle, stitches to his lip and later, some dental surgery.

Now, fully recovered with the odd nightmare from that episode when a vehicle hit him near his junior high school, Sooley is focussing on becoming the next player from the Rock, to play in the Canadian Football League. 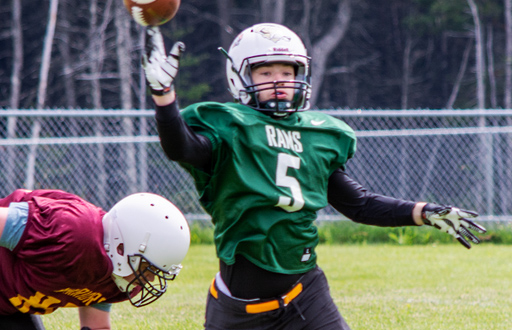 Not many have reached that plateau. Geoff Drover, who suited up for the Winnipeg Blue Bombers in 2001, was the first Newfoundlander to play in the CFL while Billy Peach, an offensive lineman from the same metropolis as Sooley, played for the Calgary Stampeders.

As for Sooley, a Grade 11 student at Mount Pearl Senior High School, the youngster admits that he might be at the age when it’s time to get a grip on things, push ahead, focus on the future, a career and what makes him happy.

Football, in a Province that doesn’t fair well in comparison with others across Canada, is something Sooley can’t get enough of it. For now, he’ll have to be comfortable playing for the St. John’s Rams, in the Avalon Minor Football League, knowing that to take the next huge step might mean attending university far from home.

“Football is very important to me, it’s a priority, and I am determined to learn everything, train hard, seek out the best coaching and take it as far as I can,” said Sooley. “It might be tough for awhile, but I am capable, conifdent and know that I have the natural talent for the game.”

The Newfoundland and Labrador Athletics Association doesn’t have a high school football league. As for the province, its first official football field, with upright goal posts, opened in 2018.

Interest in the tackle sport, one that has been in hibernation since the early 70’s, is showing signs of resurfacing with a few hundred youngsters playing in Conception Bay, Labrador and St. John’s.

Tom Fleming, President of Football Newfoundland and Labrador, coached Sooley in 2018 when a 16-and-under team was formed to compete in its first Atlantic Bowl in Charlottetown, P.E.I.

“(Sooley) is highly motivated, what one would call a natural athlete,” said Fleming. “Getting him good coaching and playing in a solid program is what he needs. With that, I’m hoping he has the desire to go all the way – to play professional.” 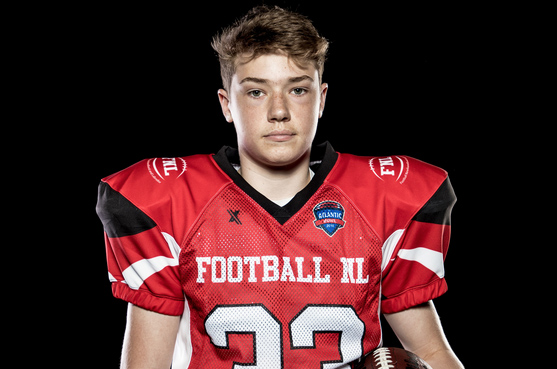 At 5-foot-11, tipping the scales at 175 pounds, Sooley, gritty and focussed, prefers the offensive game trying to be versatile at quarterback, halfback and receiver.

Recalling those earlier years, Sooley said he received his first taste of the game, during a sports day field trip in grade 6. The interest perked up, and it didn’t take him long to validate his admiration for the game.

In the beginning, everything was survival mode, and there were minor achievements. Little steps, became huge accomplishments. Learning, growing and motivated, the hard work has brought awards including his selection as 2019 Offensive Player of the Year for his team.

His parents, who wanted him to get involved in sports to build on teamwork, comraderie and to benefit from a physical activity, said experiences in soccer and hockey panned out and leaving them, at one time, thinking he would move away from sports. Not so.

“I guess they could see that I really took a liking to the sport and they were very supportive seeing that I was trying something – and having fun,” he said.

Getting to know Sooley, it becomes clear that integrity, sportsmanship and respect mean a great deal to him. As for football, nothing can now sway him away from the game. In the classroom, Sooley is now pondering a career in Nursing, and already has his eyes on attending St. Francis Xavier University in Antigonish, Nova Scotia.