We’re getting closer and closer to voting being closed down, and the All-Decade Team presented by LeoVegas being announced.

Over the summer and now into the fall, I’ve been thinking about the votes I cast and of the players who juuuust missed, in my mind.

Lately, though, I’ve been thinking of one candidate in particular. A player who did everything right over the course of his career, but who I believe just isn’t going to make the All-Decade roster, despite his brilliance.

I don’t really think it’ll be a miscarriage of any kind, just that I feel he deserves another moment in the spotlight, a reminder of how special a player he was.

That, in turn, got me wondering if there weren’t a few more players like him who likely won’t make it, just a bit too far down in the stats, or toiling in a way that didn’t see them find a spot front and centre in the mind’s eye.

With that in mind, here is just a handful of such players.

» CFL to honour the best of the last decade
» VOTE NOW for all spots
» Full list of nominees at each position
» ADT Voting schedule
» O’Leary: Collaros’ decade perhaps the CFL’s most unique

I’m starting this little list with the guy who inspired me to do it in the first place.

Simpson’s decade was very, very good, but he’ll not find a place ahead of either Solomon Elimimian nor Adam Bighill. And even though the list putter-togethers at CFL.ca decided the All-Decade Team would be made up of three traditional linebackers as opposed to two along with a defensive back/linebacker hybrid, or SAM, it would be a surprise to see Simpson as part of the trio.

But he deserves a curtain call, even if he does get lost in the shuffle owing to his stellar career beginning in 2008 and ending after the 2015 season. Shift his entire career a little, so that it matches up with the decade, and you’d have to think long and hard about him being on the All-Decade Team.

I remember pretty vividly that in the two Grey Cups that I covered that involved him (2012 and 2014) all I kept hearing was Juwan Simpson this, Juwan Simpson that. Everyone involved with the Stamps, it seemed, needed to effusively praise Simpson’s leadership abilities, his enormous value to the team.

Simpson caught your attention on the field, with his elite playmaking. Apparently, that was only a portion of what made him a Stampeders’ great. 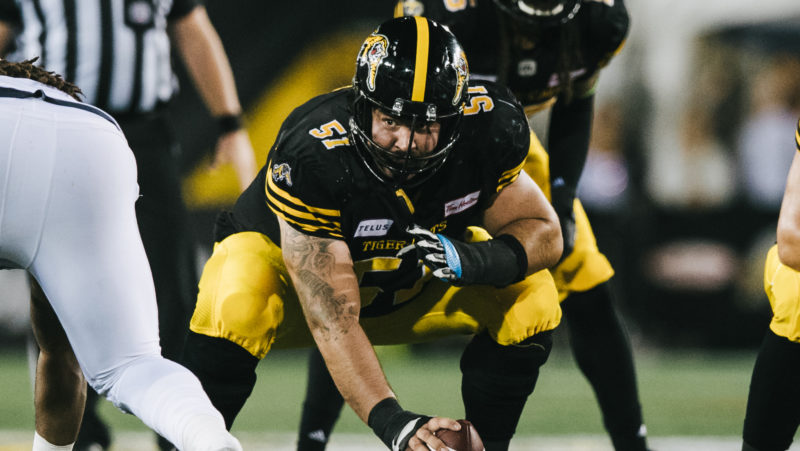 Mike Filer’s career has been one laced with determination and hard work that’s allowed him to play for his hometown team the last eight years (Johany Jutras/CFL.ca)

Mike Filer is the embodiment of stubbornness, in my mind.

My admiration and respect for him dates back to the CFL combine (then called E-Camp) in 2012. I clearly remember writing a column about this kid from Brantford, Ontario, an offensive lineman who’d played for St. Mary’s, but who did not receive an invitation to be evaluated with the top few dozen eligible draftees, in Toronto.

The day before E-Camp opened, he took part in Duane Ford’s invitational camp, full of hopefuls who aimed to get a last-chance invitation to the main draw. He impressed there, and again at the CFL camp, and wound up being drafted by Calgary, in the fifth round. Released by the Stamps at training camp, he wound up in Hamilton.

As the decade unfolded, Filer emerged as a stalwart, eventually finding a comfortable fit on the Hamilton o-line, at centre. But along the way, he had his mettle tested again when the Ticats told him he needed to trim his weight and adjust his technique, at the end of the 2018 season.

He did both and after a splendid 2019, Filer began the new decade with a contract extension that would see him returning to Hamilton as the Ticats’ longest-serving active player.

Call him the All-Decade Determination Guy.

Check the receivers who are eligible to be one of the five named to the All-Decade Team and you know you cannot find a place for him on your ballot, not without snubbing another receiver whose numbers cast a shadow on Denmark’s.

But there was just something about Clarence Denmark that has him standing out as so memorable for me during the decade. More than a depth receiver who’d emerge once in awhile for you, less than a league-wide superstar, though.

A nice mix of speedy and shifty, he was also tough enough to emerge after some big hits over the middle. A clutch guy who stepped up when stepping up was crucial.

I remember being amazed when the Blue Bombers released him in March of 2016, and surprised again when he was released by Saskatchewan at the end of training camp that same year. And I was perplexed when no other team scooped him up, until Winnipeg — in a receivers’ injury crunch — brought him back at the end of July. He finished that season and played one more in Winnipeg.

He retired with just shy of 5,500 yards and hauled in 31 touchdown catches. All along, there was just something about Clarence Denmark.

He’s my All-Decade Just Keeps Getting It Done Guy. 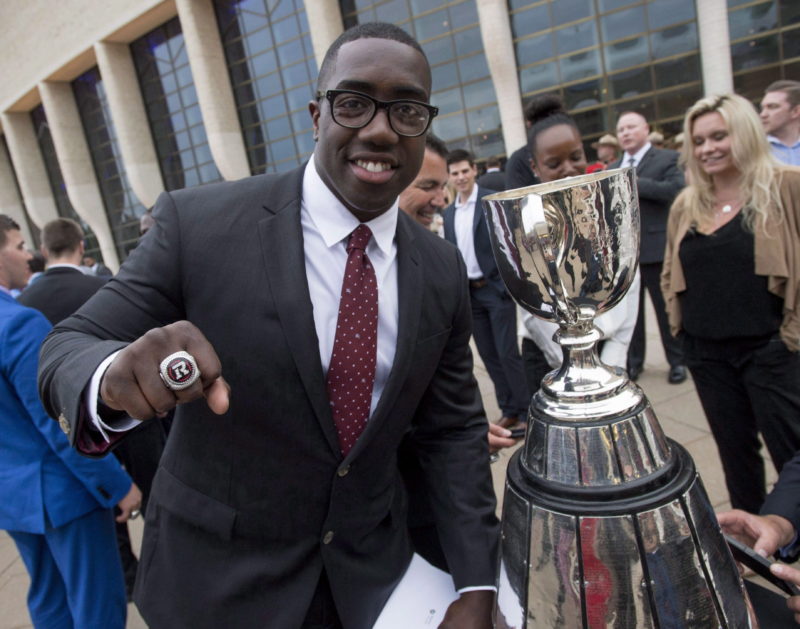 A heart and soul piece of the REDBLACKS’ Grey Cup-winning defence, Moton Hopkins had the undying support and respect of his teammates (Photo: THE CANADIAN PRESS/Justin Tang)

Like Juwan Simpson, I was struck by just how much Hopkins’ teammates loved him, and that was so, so apparent during Grey Cup Week in 2016. If he wasn’t the epicentre of the “let’s win it for him” sentiment, he wasn’t far removed from that focal point.

The stars at defensive tackle during the decade are the likes of Ted Laurent, Micah Johnson and Almondo Sewell, with men like Keith Shologan and Cleyon Laing not far behind. And you can keep going, but it’ll be awhile before you get to Moton Hopkins, statistically.

Heart and soul? He’s up there with the elite. Team guy? At the top. He had tears rolling down his cheeks moments after the Ottawa REDBLACKS had won the Grey Cup. Why, exactly, was that? I asked him.

“I love my teammates so much,” he said. “They put so much into it this season. I just can’t help myself.”

He’s the All-Decade The Feeling Is Mutual Guy.

Let me fist say that I’m delighted that there is a category for punt and kick cover warriors on the All-Decade Team. Maybe I could name each and every one of the nominees here for special consideration, but we all know that tackle numbers are what will pop for voters and that means you are voting for either Jason Arakgi or Mike Miller.

That means that neither former Lion and Argo James Yurichuk, nor former Ticat and Blue Bomber Marc Beswick is likely to get the nod. Each with 102 special teams tackles, at least Beswick got one of those rare (for kick cover guys) divisional Outstanding Special Teams Award nominations, representing the East in 2013.

Yurichuk is emblematic of the dutiful special teams player; the guy who just keeps on keepin’ on, kick after kick after kick. He didn’t get to take many snaps as a linebacker, in either BC or Toronto, but I never heard him complain.

As well, his Grey Cup celebration (BC, 2011) was the best I’ve ever seen. Yurichuk joined a videographer and a helicopter pilot, and was dropped off on a mountaintop, where he lifted The Cup over his head. THAT was an all-decade best. 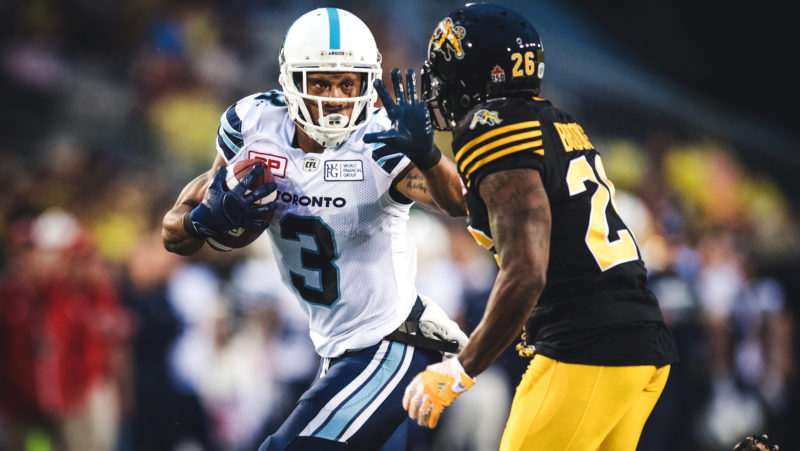 He was often called Two Way Whit for his catching and running ability, but Brandon Whitaker also excelled as a pass protector, which is what every coach hopes for from their running backs (Johany Jutras/CFL.ca)

You get to choose one running back in voting for the All-Decade Team. One.

And it’s gonna be Andrew Harris or Jon Cornish, right?

So, no room for the gifted, all-around performer who made offences go in Montreal and Toronto, doing the flashy stuff and — as importantly — the gritty stuff.

Brandon Whitaker was a stout runner, and a good pass-catcher; a guy who would dependably get to the marker and beyond, after catching a little flat route ball on a checkdown. His added value? Sensationally assignment sound, who could you say was better at pass protection than Whitaker? Whenever he actually did whiff on a blitz pick-up, I was left questioning the nature of reality for days afterward.

Whitaker is the All-Decade Whatever You Need Guy.

These are just a few of the guys who deserve to take another bow as we get closer to unveiling the All-Decade Team. Plumb the list of nominees and I’m sure you’ll find a few of your own favourites.