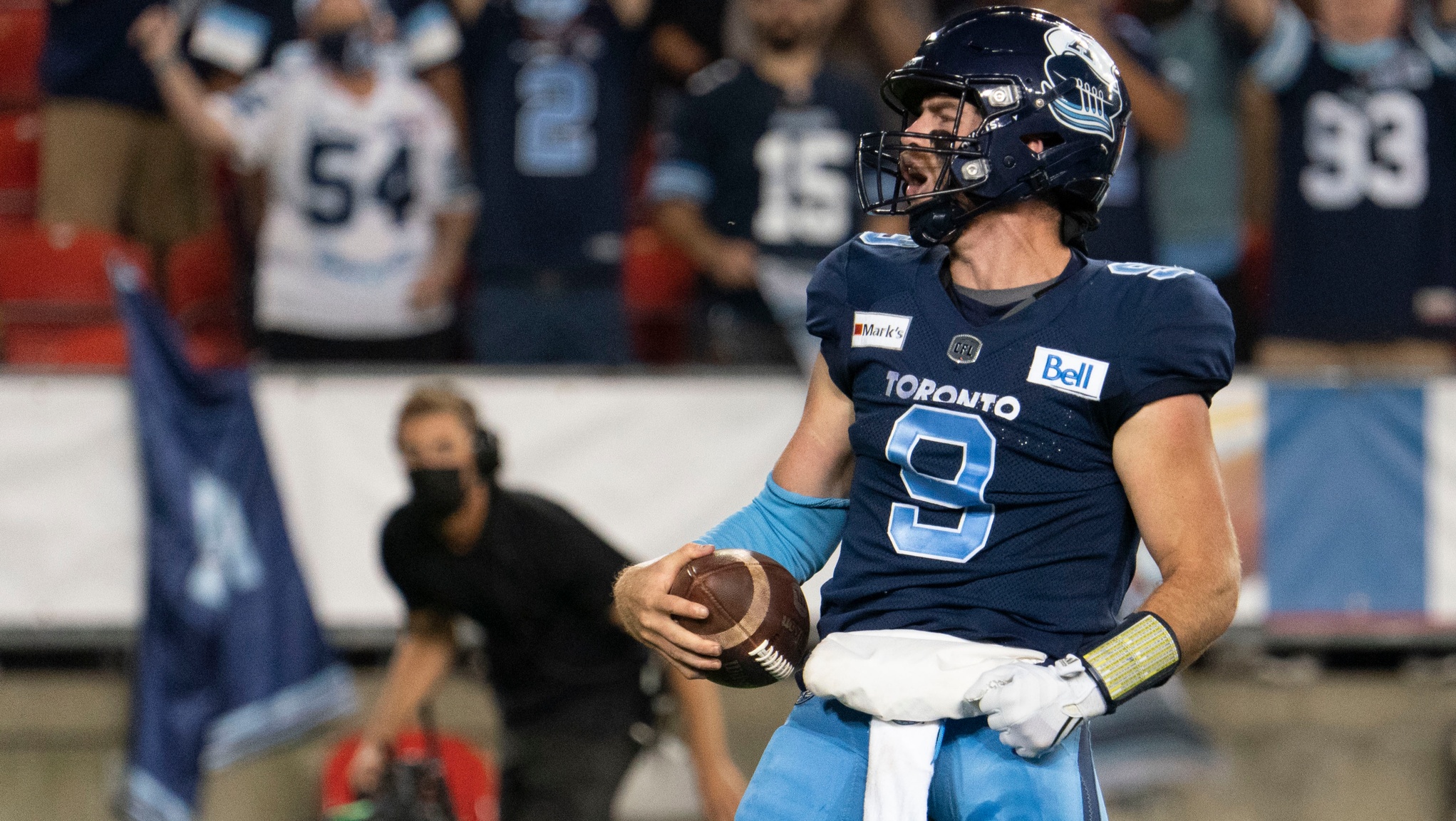 TORONTO — If someone were to stop you on the street and ask you to rank the teams in the CFL right now, based on record, performance and where the team stands health-wise, how would you answer?

Odds are just about everyone’s top team and bottom team would be easy answers. The Winnipeg Blue Bombers have raced out to a 5-1 start and just kept what had been a potent Saskatchewan offence out of the end zone for two straight games.

On the other end of that spectrum, it’s not hard to see the Ottawa REDBLACKS’ losses mounting, with them sitting now at 1-4 as the ninth-place team.

The rest? That’s where it gets really interesting.

There’s a logjam consisting of six teams with records between 3-2 and 2-3 and truthfully, you could make arguments to move a lot of those teams anywhere between spots 2-8. Then there’s the rash of possible quarterback injuries that popped up in this weekend’s games. The Riders and Ticats both lost their games in Week 6, but if they’re leaning on backups going into Week 7, that changes their respective outlooks even more.

Parity makes for fun week-to-week viewing and as we move through this season, a ton of possibilities for the playoffs. It also makes activities like power rankings extremely difficult. It seems like it’s something that everyone taking on this task is struggling with.

The Bombers’ defence seems to get stronger by the week and while it gets the headlines, how about some love for the offence? Zach Collaros put in another tidy day of work on Saturday, making 18-22 passes for 278 yards and a pair of touchdowns. He’s thrown nine TDs on the season to three interceptions. Riders coach Craig Dickenson may have said it best as he processed his last two shots at the defending champs: “Winnipeg is the class of the league right now. I think they are better than the rest of us and I think it’s by quite a bit,” he told reporters.

The Argos were lucky to not have to go to overtime against the Ticats on Friday and have things to clean up from their narrow win, but they’ll put in their work this week knowing that they’re holding on to first place in the East Division. Chris Jones’ reported emergence with the team is a fascinating mid-season wrinkle for an already very talented defensive group. How much can he change for them, schematically? How will they respond?

The Lions know they just played the weakest team in the league twice in a row and won’t get too high over their blowout win on Saturday night. They will look at the positives that have come from their first winning streak of the season. That includes touchdowns from all three phases. Obvious/fun fact: When Michael Reilly is protected well, he can make big plays. The Lions gave up just two sacks in each of their wins over Ottawa.

The Als return from their bye week and get a good test this week, with the Lions visiting on Saturday. Montreal is second in the league in sacks and will want to ramp up the pressure on Michael Reilly. Vernon Adams Jr. had the rebound performance he was looking for against Ottawa. It’ll be tougher against a pick-happy BC defence.

The Bombers have taken some wind out of the Riders’ sails, but we should keep in mind that Winnipeg has done this to just about every opponent they’ve faced this year. The real issue for the Riders this week is the status of Cody Fajardo. If he’s healthy and able to play, the Riders have a great chance to build up some confidence and get back to defending their home turf. If Fajardo’s out, we go into wait-and-see mode on the quality of depth the team has at QB.

The loss of Dane Evans (4-6 weeks with a lower body injury) is a big one for the Ticats, who had won two straight and were in a scrappy game against the Argos before their 1b QB hit the turf holding his leg. If Jeremiah Masoli’s ribs are healed enough — Orlondo Steinauer says Masoli and David Watford will dress this week with a decision on a starter coming — he’ll have to find ways to make the offence productive; that’s something he struggled with prior to his injury. It’s not just at QB where the Ticats are hurting, either. They’ve been without Bralon Addison, DeVier Posey and were without Brandon Banks for the Labour Day rematch. They need to get some of these key pieces back ASAP.

Bo Levi Mitchell didn’t look like his usual self on the field in Edmonton on Saturday, but he got a familiar result, steering the Stamps to a tough win at Commonwealth Stadium. The timing with his receivers should improve this week for their trip to Hamilton. Was Mitchell’s late-game TD toss to Kamar Jorden a sign of things to come for the Stamps’ offence? Mitchell and coach Dave Dickenson hope so.

The Elks went from their best game of the season on Labour Day to an absolute offensive rut on Saturday that had no offensive touchdowns and saw Trevor Harris get sacked seven (!) times. The win last week was so convincing that it makes it that much more disappointing and perplexing to see the team yo-yo like this. It also makes it easy to put Edmonton at the bottom of the jumble of teams that are record-wise, jammed in the middle of these rankings.

This may feel like a very long bye week for the REDBLACKS, who have looked increasingly lost in their last three games. Dominique Davis is at least helping put points on the board, which is a step in the right direction. Turning the ball over is a step back, as are the defensive mishaps that are letting opponents find the end zone far too frequently.