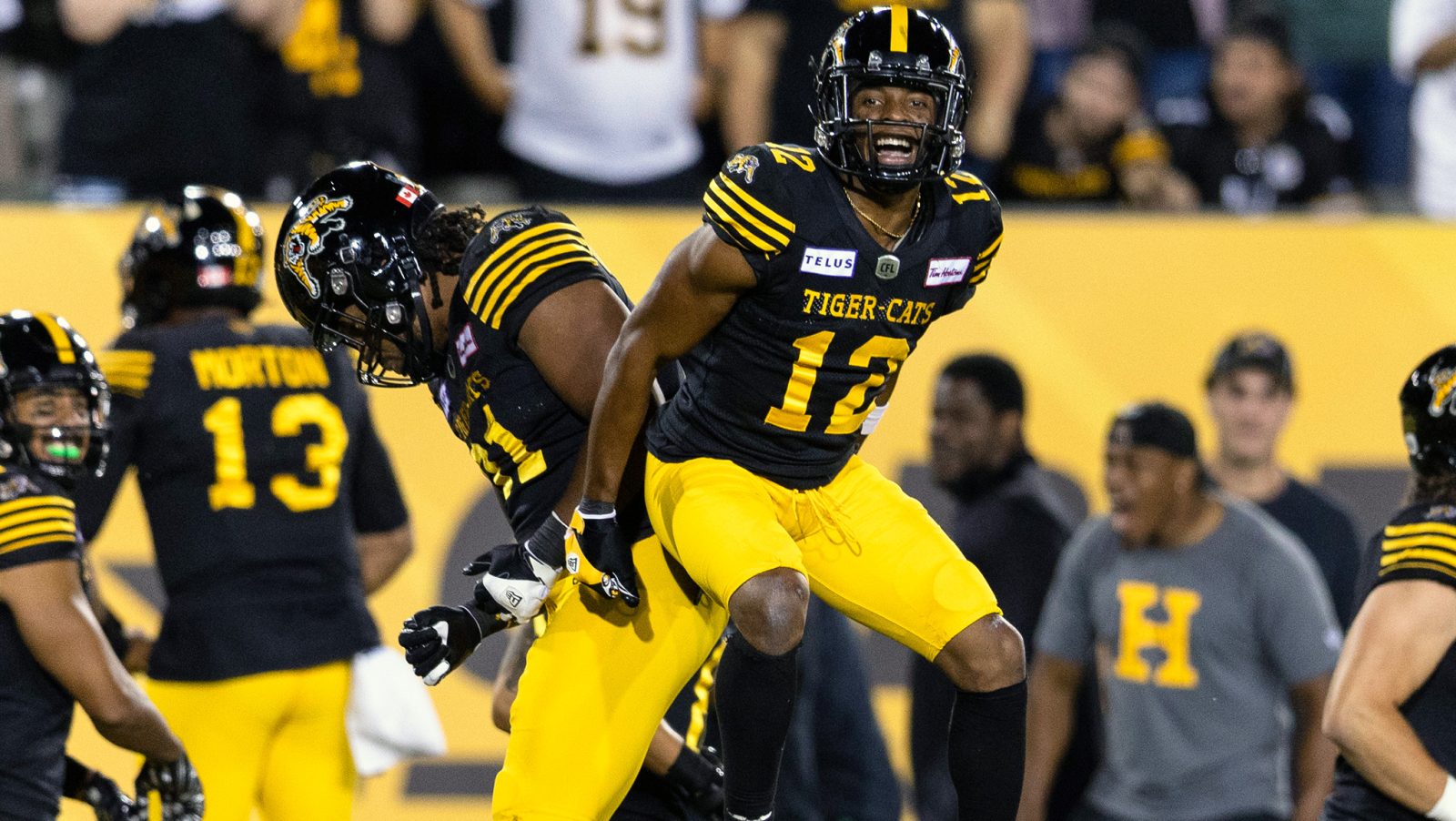 Yes, you can now officially have your say in helping select this year’s group of CFL All-Stars, yet, as always, this article is here to help you select an elite team of fantasy all-stars for Thanksgiving weekend presented by Purolator.

The formula of long weekend paired with a Monday CFL football game, equals uncontrolled happiness, along with an array of elite receivers to choose from, some who will likely be selected as CFL All-Stars next month.

With a salary worthy of an All-Star nod, Tim White is costly, yet worth every penny. With 118 targets he is league’s most targeted receiver and is a near lock to record his first career 1,000-yard season on Friday with 983 yards entering Week 18. Considering he’s scored five touchdowns while racking up three 100-yard games in Hamilton’s last six contests, few receivers are playing at his level.

Every game is going to feel like a Divisional Semi-Final for the Hamilton Tiger-Cats, who currently are on the outside looking in at the chase for a playoff spot. That means White will continue to receive a heavy dose of targets, as he has averaged better than 10 targets per game over his last five contests. Proving to be impactful with his catches, White has put up a reception of at least 26 yards in all but one contest over his last six games, with two catches going for at least 60 yards.

The Saskatchewan Roughriders may know exactly where the ball is going on Friday, but don’t count on them being as effective against White as they were in Week 1 when they held him to just two catches for seven yards. Anchor your lineup around White and reap the benefits.

Saskatchewan is hoping to have Jamal Morrow ($8,639) back within 2-3 weeks. In the meantime, the Roughriders will go with Kienan LaFrance ($2,500) and the recently signed Shaq Cooper ($4,191) to handle ball-carrying duties.

However, if the challenge of running the ball is anything like it was in the Week 17 loss to the Winnipeg Blue Bombers, then using Saskatchewan backs could end up feeling hollow in your fantasy roster. The Riders had 16 rushing attempts on Friday, and of those, LaFrance had just six, with the rest going to quarterback Cody Fajardo ($9,628), who had nine while receiver Kian Schaffer-Baker ($6,223) had the other carry.

If it feels like it’s been light years since we’ve gushed over how dominant the Riders ground game looked with Morrow and Frankie Hickson ($5,149) gobbling up yardage, then, well, that’s because it is. 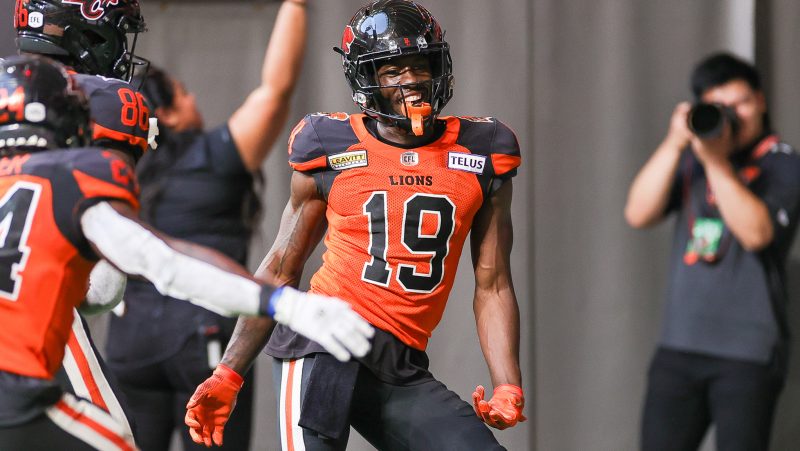 BC Lions receiver Dominique Rhymes is averaging 16.4 yards this season, the best total of his career (BCLions.com).

If Friday was the start of a dominant run from BC quarterback Vernon Adams Jr. ($6,939), then lock up a spot on your fantasy roster for Dominique Rhymes, who caught five passes for 103 yards on six targets in the win over the Ottawa REDBLACKS. Rhymes has become the featured piece in BC’s passing attack and leads the league with 1,165 yards to go along with a CFL-best 11 catches of at least 30 yards. His 36-yard grab on Friday was his first 30+ catch since Week 12, a very good sign that he and Adams have found a passing rhythm.

The Toronto Argonauts did a good job in containing the Stampeders passing game in Week 17, holding Jake Maier to just 175 yards and a touchdown. They still lead the league with just 13 passing majors allowed, but neither of those factors should deter fantasy users from starting Rhymes, who, by the way, is also second in the league with 10 receiving touchdowns.

The hot hand of McLeod Bethel-Thompson was cooled off in Week 17 as the Stampeders snapped his run of nine touchdown passes over his last four games. They also limited the Toronto quarterback to 194 yards, only the second time this season Bethel-Thompson was kept under 200 yards.

BC did allow 363 passing yards to Nick Arbuckle ($8,129) in Friday’s win, but allowed just one passing touchdown, late in the game. One thing the Lions pass defence does well, is limiting what Toronto does best: passing for first downs. BC’s defence allows the fewest first downs through the air, and if they are able to do so against the Boatmen, then Toronto could be handcuffed by their inability to move the chains on the ground, as the Argos are last in the league in rushing first down.

History tends to suggest laying off Bethel-Thompson for a game or two after a hot streak ends, so follow that trend until the quarterback solves his struggles.

No quarterback has earned consecutive CFL All-Star honours since Hall of Famer Ricky Ray do so in 2013-14. That streak is likely to end as Zach Collaros continues to deflate opposing secondaries in a remarkable season. One that could also see him become the league’s first back-to-back Most Outstanding Player since Hall of Famer Anthony Calvillo pulled off the feat in 2008-09.

Collaros has thrown for multiple majors in 11 of his last 12 games. Only one down week in Week 3 against the Ticats keeps from having thrown a touchdown pass in each game this season. With a career-high 30 passing touchdowns, Collaros will hav an opportunity to continue to increase the total against an Edmonton Elks defence that has allowed a league-high 24 passing touchdowns. Regardless of price, building a Week 18 lineup behind Collaros is a winning proposition.

Taylor Cornelius was knocked down a peg in Saturday’s loss to the Montreal Alouettes, a defeat that set the league record for consecutive home losses in Edmonton with 15. Cornelius threw a pair of interceptions without a major, while also being held to just 23 rushing yards on five attempts. Winnipeg, who was second in run defence at the time, kept Cornelius in check in the previous meeting against Edmonton, holding him without a passing touchdown and limiting him to 59 rushing yards on 15 attempts in the Week 7 victory.

The upside for Cornelius is bright, and there is some potential in him pairing with Dillon Mitchell ($5,398), who now becomes the Elks featured wideout with the announcement that Kenny Lawler will undergo season-ending surgery. However, Cornelius’ salary is too steep to bet on him looking like a future All-Star against a Bombers defence that already looks like it’s in playoff mode. 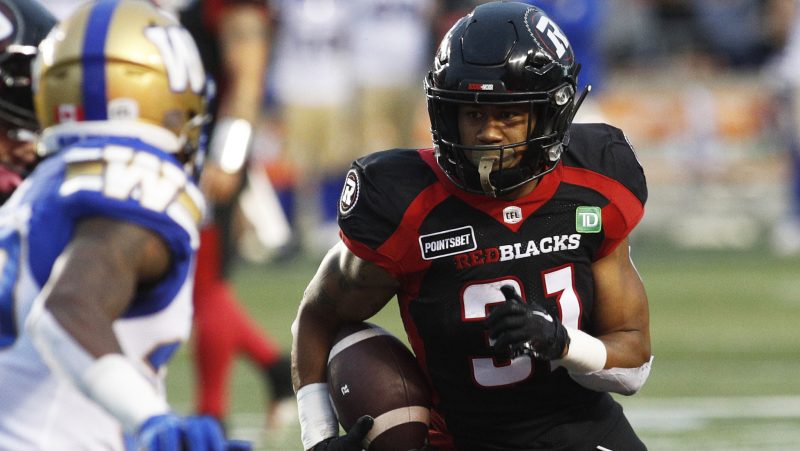 Ottawa REDBLACKS running back Devonte Williams leads the team with 454 yards despite playing in only eight games (The Canadian Press).

With so many high-end players to consider starting, we will need a value play, and Ottawa’s Devonte Williams find himself in a potentially favourable matchup against an Alouettes run defence that struggled to slow down Edmonton rookie Kevin Brown ($5,467) in the Week 17 win over the Elks.

Williams has averaged better than 80 yards from scrimmage in each of his last four games, yet the only thing keeping him from being a very productive fantasy option is the inability to find the end zone. Williams has yet to score on any of his 117 touches from scrimmage this season, but the chances of that continuing gets smaller each time the REDBLACKS call his number. Facing an Alouettes defence that is eighth in yards allowed per game and has allowed 19 rushing touchdowns provides a great opportunity for Williams to celebrate his first trip to a CFL end zone.

The tandem of Walter Fletcher ($4,467) and Jeshrun Antwi ($5,167) have been productive as a unit, yet neither offers much fantasy value. Between the two of them, they have 162 carries but only one rushing touchdown, which Fletcher scored in Week 4.

This could be altered significantly if William Stanback ($7,604) makes his return to the starting lineup after being sidelined since Week 1. Stanback was limited in practice last week, but did not participate in the team’s Week 17 matchup. The addition of Stanback will add intrigue, but even if he does start on Monday, caution should be advised as it will take a few carries to shake the rust off for the 2021 CFL-All Star.