How Joey Moss worked his way to become an Edmonton legend

How Joey Moss worked his way to become an Edmonton legend

Early on in what’s turned out to essentially be a lifetime spent in the locker rooms of the Edmonton Oilers and Eskimos, Joey Moss became a fixture to both clubs.

At the urging of Wayne Gretzky, Moss joined the Oilers in the 1984-85 season and the Esks in 1986. He seemingly found his place with both teams instantly. Along the way, Moss slid his way into the heart of the city of Edmonton.

Now 54, Moss’s story is a remarkable one of how two professional sports teams and a city embraced and valued a person with Down syndrome.

“(The people of Edmonton have) known him for so long and seen how somewhat surprising it is that he’s still there, at work,” Joey’s younger brother Steven said. “He always has a smile on his face. The way he embraces the crowd, he puts two hands up in the air, gets applause and has that big smile.”

Steve is the youngest of 13 children, with Joey No. 12, five-years older. At 15, Steve was the first Moss family member to work for the Oilers, when they won their first Stanley Cup. Joey joined a year later and as Steve puts it, “never looked back.”

“I had a chance to see him work in the locker room and interact with the players. The positive energy that he brought into that locker room has made him who he is. They can’t get enough of him.”

Through all of those years spent in locker rooms and all of the brushes with fame that came with it — people in both organizations have said for years that Joey is the most famous person in Edmonton and doesn’t know it — Joey became the recognizable and loveable face that was always around.

He’d be with Gretzky and that iconic Oilers team in photos, or you’d spot him on the end of the Oilers’ bench, singing the Canadian and American national anthems. Sometimes you’d catch glimpses of him cleaning things up in the Oilers or Esks locker rooms while players did post-game interviews with the media.

Along the way, the city took Joey in as its own. He began to be invited to charity events, Steve recalled, sometimes to sing the anthem, or just to make an appearance. In 2003, he won the NHL’s Seventh Man Award, given to NHL members that make a difference in people’s lives behind the scenes. In 2008, a mural was created on 99 street in Edmonton, with Joey wearing an Eskimos’ green and gold jacket, waving from the stands at Commonwealth Stadium, with the old Northlands Coliseum behind him. 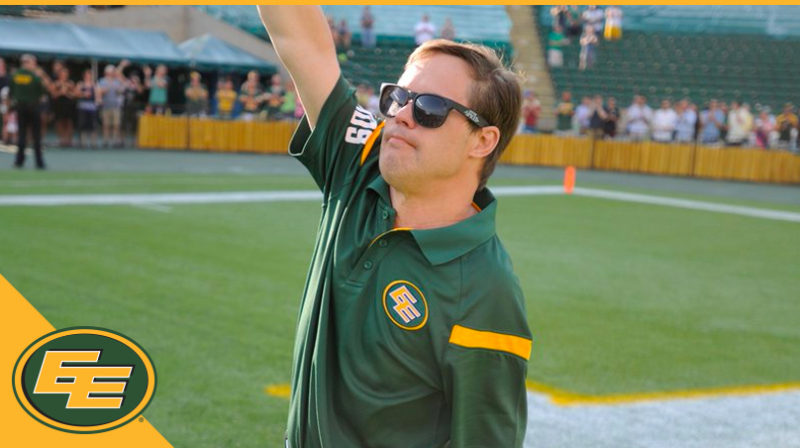 Out of all of the incredible moments over the years, watching Joey turn 50, Steve said, is the one that stands out to him the most.

His family, friends, the Esks and Oilers along with the Winnifred Stewart Association (an organization that helps people with disabilities live fulfilling lives in their community) threw him a party to celebrate the milestone. The Eskimos honoured him during a game and had a customized cake waiting for him in the locker room after.

“It was like a never-ending birthday party. The whole city embraced him,” Steve said. “That was big. I think that was probably the time I saw it the most.”

Shortly after Joey’s induction to the Alberta Sports Hall of Fame was announced in 2015, longtime Esks equipment manager Dwayne Mandrusiak said that his compassion has made him irreplaceable to the teams.

“He sees guys get cut and he knows that they’re upset and he’ll go over and put his arm around them and tell them that it’s going to be all right,” Mandrusiak told the Edmonton Journal. “We’re all afraid and we think, ‘What do you say to a guy like that when something is going on?’ and Joe walks over and talks to people.”

For all of the fun that comes with Moss in a locker room — there are legendary stories of him having wrestling matches with players, of one-liners and pranks — he’s always diligently gone about his job.

“I used to say to the workers, the kids would be bugging me and I’d say, ‘I would trade you all for another Joe Moss,’” Mandrusiak said in 2015. “The problem is there’s only one Joe Moss.”