A little can go a long way.

If you need proof, check out the story involving fraternal twins, Elijah and Jayquan Beckford.

They were born at Toronto’s Mount Sinai Hospital in 2004, each weighing about one pound and, according to their mother, not given much hope for survival.

A high-risk pregnancy had doctors making the decision to deliver the boys prematurely at 26 weeks. At the time, unable to breathe on their own, there were multiple factors that left specialists very concerned.

After several months of hospitalization and tender care, medical staff determined that the Beckford brothers were able to go home. The “Welcome to the world” adventure has been shared time and time again. Now, older and able to comprehend, the boys are thankful for many things. 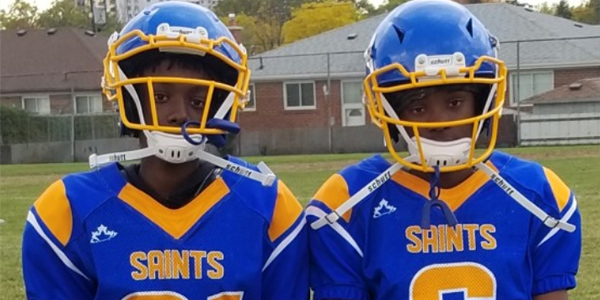 Active and athletic, Jayquan and Elijah are now part of another kind of life story and a resurgence that is not quite as consequential. This time, it’s on the football field at an educational institution named after a Canadian artist, Charles Williams Jefferys.

C.W. Jefferys Collegiate, a school that has had its share of tragic incidents, is also the home of an enriched science, technology and mathematics program. Now, after a 10-year absence, the marvel of football has returned – and the Beckford twins, both wide receivers, are part of the revitalization.

“You watch (football) on television and never think of playing until you try it – and we did for the first time,” said Jayquan Beckford, the oldest of the twins and by four minutes. “I was terrified at the start, but things changed for the better real fast. It’s very competitive and makes you want to try harder. I know that playing has helped my confidence.”

Elijah Beckford admitted there’s also a bit of healthy rivalry between the two, with each wanting to be better than the other.

“People see football as being dangerous and in some cases, it might be, but there are so many other things in life that are dangerous, too,” said Elijah. “I have learned so much just from football – and in a short time. The physical activity is good, the sport and there’s lots of enjoyment.”

Elijah is 5-foot-6 and 117 pounds while Jayquan measures in at 5-foot-5 and hits the scale at 139 pounds. Neither has scored a touchdown, but they have had their share of receptions and represent their school and community with diligence and honour.

With interest from many students, it was Tracey Galbraith, Athletic Director at C.W. Jefferys, who pushed for the re-launching of the football program. Galbraith also gained support from the school administration, parents, and was successful in receiving a start-up fund to help with the costs of equipment.

Galbraith said the launching pad for the football rebirth may have been prompted at a school assembly on anti-bullying, one that highlighted a message from Jamal Campbell, a 6-foot-7, a 300-pound offensive lineman with the Toronto Argonauts – and a C.W. Jefferys graduate. Campbell may have lit the spark about how football contributed to his learning, the importance of teamwork, and a professional career that included a Grey Cup ring.

“Students came to me, there were about 35 (students) expressing interest and many didn’t know the skills, but wanted to try and learn,” said Galbraith. “Two volunteers offered help and have made a huge contribution and commitment of personal time to make it work.”

Jefferys competed in the Toronto District School Board’s seven-team Tier Three Division and finished the season with a league-record 3-2, two points out of first place. The Saints qualified for the semi-finals but lost 13-6 to Western Tech.

Carlo Onorati was one of those volunteers who offered to help coach.

Onorati knows something about football having played and coached at St. Michael’s College School and was also a former Vice President with the Toronto Junior Argos. He also saw budding talent with the Beckford boys and claims that before they graduate, they could become exceptional players.

“Agility, not scared of contact, great sets of hands and I quickly noticed their timing was superb – especially for guys who had never played the game in past,” said Onorati, who is Business Development Manager at Kahunaverse Sports Group. “Elijah and Jayquan never missed a practice. Football came naturally and from the get-go, they were quick to understand and played on a varsity team with others older than them.”

While the twins are low key and respectful, they reveal promise for what lies ahead. In a face-to-face conversation, their eyes glitter at the sheer mention of football.

“We know there can be struggles in life, but you stay focused and optimistic,” said Elijah. “You have to be confident, earn respect and football can be a happy place when you’re feeling down.”