British LB Izinyon on CFL Combine invite: ‘It still feels like I’m in a dream’

British LB Izinyon on CFL Combine invite: ‘It still feels like I’m in a dream’

When British linebacker David Izinyon was told at the end of the CFL Global Combine in Bristol, England that he would be headed to Toronto in late March, he was stunned.

“It still feels like I’m in a dream. I am still pumped and so excited. I can’t wait to get there,” he said a day after performing well at the combine held at the SGS College in Bristol.

Under the watchful eyes of CFL CFO and Director of Football Operations Greg Dick and his staff, 19 athletes were put through their paces at the outdoor facility.

“David performed extremely well in conditions that were not the best.” said Dick. “We saw some great athletes and David was at the top. He projects very well and could do really well in both speical teams and on the defensive line.”

“He hired someone to coach him in each test discipline from the 40-yard dash to everything else. He was really determined to make it.” 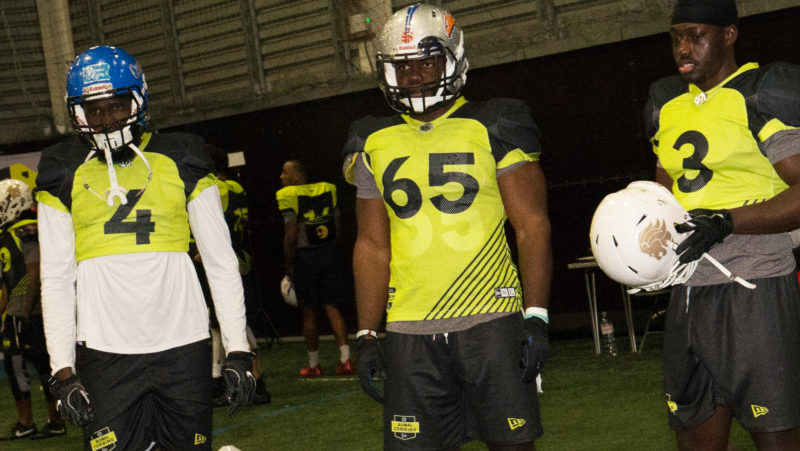 David Izinyon gets set to participate in the one-on-one drills at the Global Combine in England (Photo: Martin Preedy)

The six-foot-one, 245-pound, 26-year-old from London, started out life, as most British youngsters playing rugby. But in his late teens, he found himself at a tryout for football at the University of Surrey.

“I started studying at the University of Surrey which had an American football team and they had a ‘taster day’ to give people a chance to try it out. I loved it right away and ended up playing for the Stingers for three years.”

He finished his schooling and found his way to a London Warriors practice in 2014 and caught the eye of head coach Tony Allen. Allen, a former NFL Europe Director of Player Development, has built a powerhouse program in the British American Football Association Premiership and with Izinyon the team won three straight British titles from 2014 to 2016.

He ventured over to Europe the following season joining the Hämeenlinna Huskies in Finland and then spent the last two years playing for the Rostock Griffins in Germany’s GFL2 division. In 2018 and 2019 he amassed 272 tackles for the Griffins, third-best in the league.

He hasn’t made a decision on where to play this year though. It will depend of course on the results of the next combine.

He has incentive now after the breakthrough year that Germany’s Thiadric Hansen had with the Grey Cup-winning Winnipeg Blue Bombers.

“When I heard about the draft last year, I started following Hansen since I knew about him from playing in Germany. He gave us so much hope. I wondered if I would ever get the same chance and now look what’s happened. I can’t believe that I made it past the first step.”

Although he knew little about the Canadian game before, he has definitely done his homework.

“I know the game is different with all the motion, three downs, 12 men and everything else. And I know that I had better be in the best shape to be able to keep up in the Canadian game which seems so much faster.”

Naturally one of his role models is former London Warrior Efe Obada who now plays for the Carolina Panthers. He just needed to get a chance he said and now he has it.

“As long as I can get on a field in the CFL and I want to work hard and really make an impact. I know I have to be so much more disciplined, but I will come to Toronto ready.”