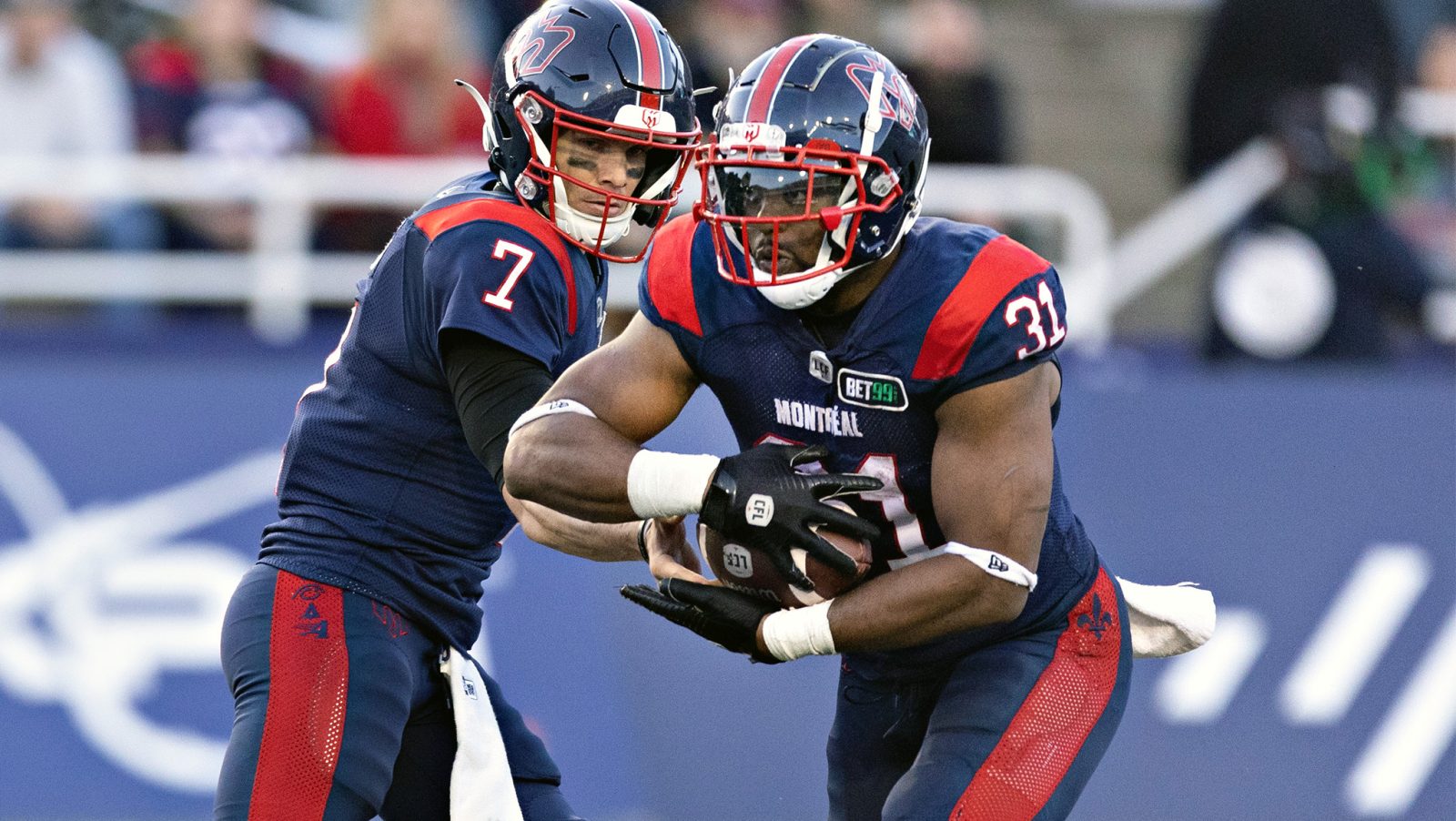 TORONTO — Entering the final week of the 2022 CFL regular season, playoff positions in both the East and West Divison have been secured, but that doesn’t mean there won’t be plenty of exciting action to follow along with in Week 21.

There is potential to see Nathan Rourke back under centre in BC, Saskatchewan’s Kian Schaffer-Baker has an opportunity to become the second Canadian with 1,000 receiving yards and pair of Davis’ will takeover at quarterback for Montreal.

As fans eagerly await the 2022 post-season, there is still one more weekend of action-packed regular season football to be had. CFL.ca is here with Checking Down to bring you everything to know before Friday’s kickoff between the BC Lions and Winnipeg Blue Bombers from IG Field. 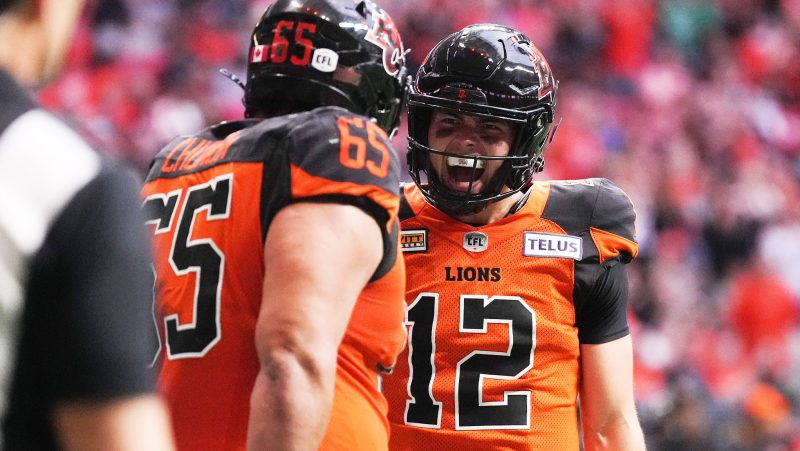 Despite playing in just nine game this season, BC Lions quarterback Nathan Rourke has the highest completion percentage among starting quarterbacks and his 3,281 passing yards are the seventh most league-wide (The Canadian Press).

– The BC Lions announced on Tuesday that star quarterback Nathan Rourke is expected to start in the final game of the regular season, after being sidelined with a foot injury since Week 11 (CFL.ca).

– Speaking to team media following the announcement of his expected return, Rourke said that he felt like he was apart of the team again and that he was excited to be back on the field (BCLions.com).

– BC running back James Butler carried the ball 24 times for 141 yards and a touchdown as he helped the Lions secure a win over the Edmonton Elks in week 20. For his efforts, the BC back was also named one of the CFL’s Top Performers of the week (CFL.ca).

– Entering the final week of the regular season, the playoff matchups are set. Following Week 20, the Lions earned the right to host the Calgary Stampeders in the Western Semi-Final on November 6 from BC Place (CFL.ca).

– Calgary Stampeders defensive lineman Derek Wiggan was awarded the Stampeders Presidents’ Ring this week. It has been presented annually since 1967 to the Stampeders player who best demonstrates excellence on and off the field as voted by the players. Wiggan spoke to team media after receiving the award (Stampeders.com).

– Stampeders running back Dedrick Mills was one of three running backs to be named CFL Top Performers for Week 20. In the team’s win over the Saskatchewan Roughriders, Mills had 17 carries for a team-high 103 yards and scored his first CFL touchdown (CFL.ca).

– In the latest edition of CFL Fantasy Start vs. Sit, CFL.ca’s Brandon C. Williams explains why Mills is one of this week’s must-add running backs for fantasy users (CFL.ca).

– Calgary running back Ka’Deem Carey leads all CFL running backs with 1,088 rush yards, just 34 more than BC’s James Butler. In a post-game interview with TSN, Carey said he knew how close he was to the rushing title, but outlined his awareness of how closely Butler is following (CFL.ca).

– Despite their season coming to a close, there was still major news coming out of Edmonton earlier this week. The Edmonton Elks announced that they had signed pass-catcher Dillon Mitchell to a contract extension that will keep as a member of the Green and Gold through 2025 (CFL.ca).

– Elks players gathered at Commonwealth Stadium for the final time of 2022 earlier this week. Team members spoke to media and many shared the belief and a sense of optimism that the team will trend in the right direction for the 2023 season (CFL.ca).

– Speaking to team media in the end of season media availability, veteran receiver Derel Walker maintained that he was thankful to be in the league and that he is excited to see the Elks make a positive transition next season (GoElks.com).

– Quarterback Mason Fine made his first start of 2022 in Week 20 for the Saskatchewan Roughriders. Approaching the final week of the regular season, Fine told team media he is feeling more comfortable than he was last week (Riderville.com).

– Saskatchewan head coach Craig Dickenson told team media earlier this week that despite their playoff standing, the goal is to play their best football in Week 21 against the Calgary Stampeders (Riderville.com).

– Ahead of their Week 21 matchup with the BC Lions, receiver Drew Wolitarsky returned to practice for the Winnipeg Blue Bombers. The veteran receiver said he felt like a rookie and that he was excited to be back on the field after an injury that has kept him sidelined since Week 15 (BlueBombers.com).

– The Bombers defensive secondary has started nine different combinations this season, defensive backs coach Jordan Younger described why his units’ ability to adapt is one of their best traits (BlueBombers.com).

– The CFL has announced six team award winners from each CFL club who will advance to the next stage of voting in the lead up to the 2022 CFL Awards, find out which Blue Bombers made the list (CFL.ca).

– With a 30-27 over the Ottawa REDBLACKS in Week 20 paired with a loss from the Roughriders, the Hamilton Tiger-Cats secured their spot in the 2022 post-season. With the playoff matchups set, the Ticats will be travelling to take on the Montreal Alouettes in the Eastern Semi-Final from Percival Molson Stadium on November 6 (CFL.ca).

– Ahead of the team’s Week 21 rematch with the REDBLACKS, Hamilton head coach Orlondo Steinauer spoke to team media about the importance of player management approaching the playoffs (Ticats.ca).

– Despite clinching their second consecutive East Division title in as many seasons with a win over the Alouettes in Week 20, Toronto Argonauts quarterback McLeod Bethel-Thompson and a few members of the offence were already watching film on the flight back to Toronto, knowing there was still much work to be done (Argonauts.ca).

– Toronto running back A.J. Ouellette has been pivotal to the Argonauts success through 2022. Earlier this week the Argos ball-carrier spoke to Argonauts.ca about his recent play and becoming a fan favourite throughout the league (Argonauts.ca).

– Approaching the final game of the 2022 regular season, CFL.ca Matthew Cauz details why he’s looking forward to the prospect of seeing quarterback Chad Kelly under centre for the Double Blue on Saturday (CFL.ca).

– In their final game of the regular season, the Ottawa REDBLACKS will host the Hamilton Tiger-Cats in an East Division battle. The REDBLACKS will be celebrating Halloween and fan appreciation night during Saturday’s contest (OttawaREDBLACKS.com).

– Despite suffering a loss to the Ticats in Week 20 there was still reason to celebrate. Ottawa quarterback Caleb Evans made CFL history, setting the record for most rushing touchdowns in a single season by a quarterback with his 15th rushing major of the year (OttawaREDBLACKS.com)

– Ahead of their meeting with the Toronto Argonauts, the Montreal Alouettes announced that quarterbacking duties have been placed in the hands of Dominique Davis and Davis Alexander, as the team has decided to rest Trevor Harris prior to hosting the Eastern Semi-Final on November 6 (MontrealAlouettes.com).

– Montreal receiver Eugene Lewis has been one of the most dominant playmakers over the course of the 2022 regular season. CFL.ca gives fans a new perspective on Lewis with GENO: The Story of Eugene Lewis (CFL.ca).

– With the announcement of the CFL award winners this week, see which Alouettes will have been nominated for the opportunity to win league-wide awards alongside Lewis (CFL.ca).