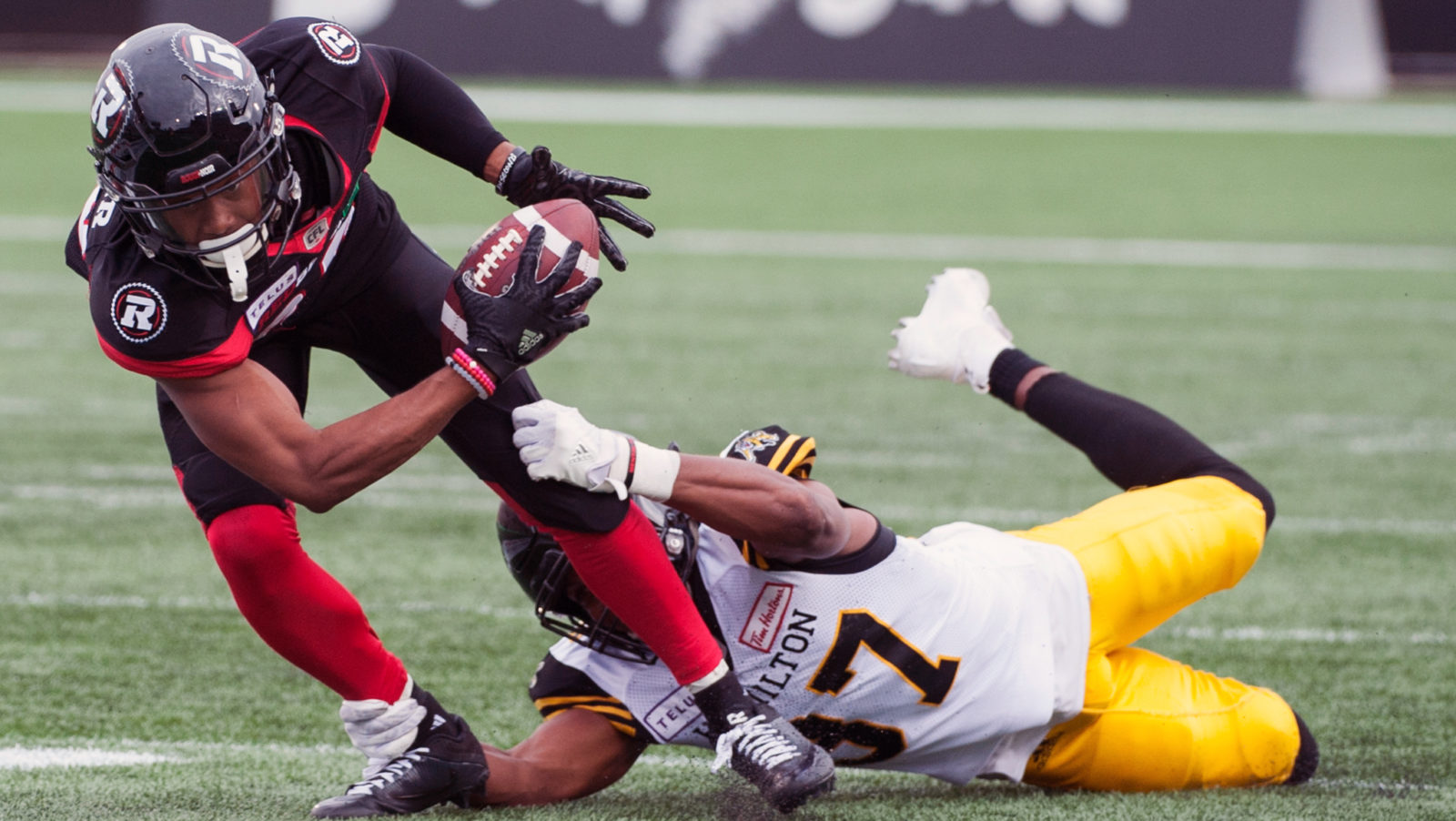 TORONTO — Are the Ottawa REDBLACKS ready to run away with the CFL’s East Division?

After years of sub-par play in the East, where a .500 record has often been enough to win the division, the REDBLACKS are doing everything in their power to rewrite the narrative.

A win over Hamilton last week created some separation between Ottawa and the rest of the division, while the 1-5 Argos are on tap, giving Rick Campbell’s team a chance to start the season 5-2.

The REDBLACKS’ success has surprised many, but perhaps even more surprising is the method by which most of their victories have been achieved. With electrifying offensive players like Diontae Spencer, Greg Ellingson and Brad Sinopoli, one would expect high scores and plenty of fireworks in the nation’s capital.

Instead it’s been the defence, led by off-season addition Noel Thorpe. Last game the REDBLACKS were able to win on the strength of seven field goals from Lewis Ward, adding two points in the standings despite not even finding the end zone.

With the clout on both sides of the ball to contend this season, the REDBLACKS are on the rise in the Nissan Titan Power Rankings. How high can they fly?

The Stamps are still undefeated, but revealed in Week 7 perhaps just a hairline crack in the armor, amassing 227 yards and 12 first downs in a 34-22 win over the Riders. Dave Dickenson’s team has a chance to be 7-0 going into the bye with a home date with the BC Lions on tap.

After a slow opening quarter, Mike Reilly scored five touchdowns — four through the air and another on the ground — to lead a blowout victory of the Montreal Alouettes. For the Eskimos, who have played only two games against the West this year, Thursday’s matchup against the Riders presents the first true measuring stick.

The Bombers outscored the Argos 78-34 during a home-and-home sweep. With Matt Nichols shaking off the rust and Richie Hall’s defence improving week-to-week, Mike O’Shea’s team is just now starting to play the way many envisioned going into the new season.

The REDBLACKS have stormed out of the gate with four wins in their first six games, their only two losses coming to undefeated Calgary. Yet it’s not the way you’d expect, with the defence playing a leading role. New defensive coordinator Noel Thorpe has made Ottawa the early-season East Division favourite.

The Riders fall a spot despite a valiant effort against the Stampeders, in which they actually had more yards, first downs and time with the football than the league’s lone undefeated team. Chris Jones’ defence is special, but there are questions about an offence that’s stagnated through the first six weeks of the year.

As has often been the case throughout 2018, the Ticats had trouble finishing drives and ultimately the game in a last-second loss to the Ottawa REDBLACKS on Saturday. The onus falls on Jeremiah Masoli to play more consistent, with the Ticats’ pivot throwing more picks (6) than touchdowns (5) so far this season.

Fresh off the bye, the biggest test for the revamped BC Lions comes against the undefeated Calgary Stampeders — on the road no less. If Mark Washington’s defence can keep Bo Levi Mitchell at bay, Travis Lulay will have a chance to be the first to unseat the Stamps this season.

The switch to McLeod Bethel-Thompson seems like an act of desperation for the defending Grey Cup Champs, who have struggled to a 1-5 start. On the bright side, they’ve yet to play an East Division opponent, while it appears Bear Woods and Anthony Coombs are on their way back from injury.

Johnny Manziel had a first-hand look last week at the challenges he’ll be facing as the Montreal Alouettes’ starting quarterback. In a strange twist of fate, Manziel’s first career start could come against his former team, as the Als could move as high as second in the East with a win over the Ticats.

Fan Poll
How many games will the Stampeders win this season?
18
Vote
15-17
Vote
14 or fewer
Vote
Submit View Poll Results