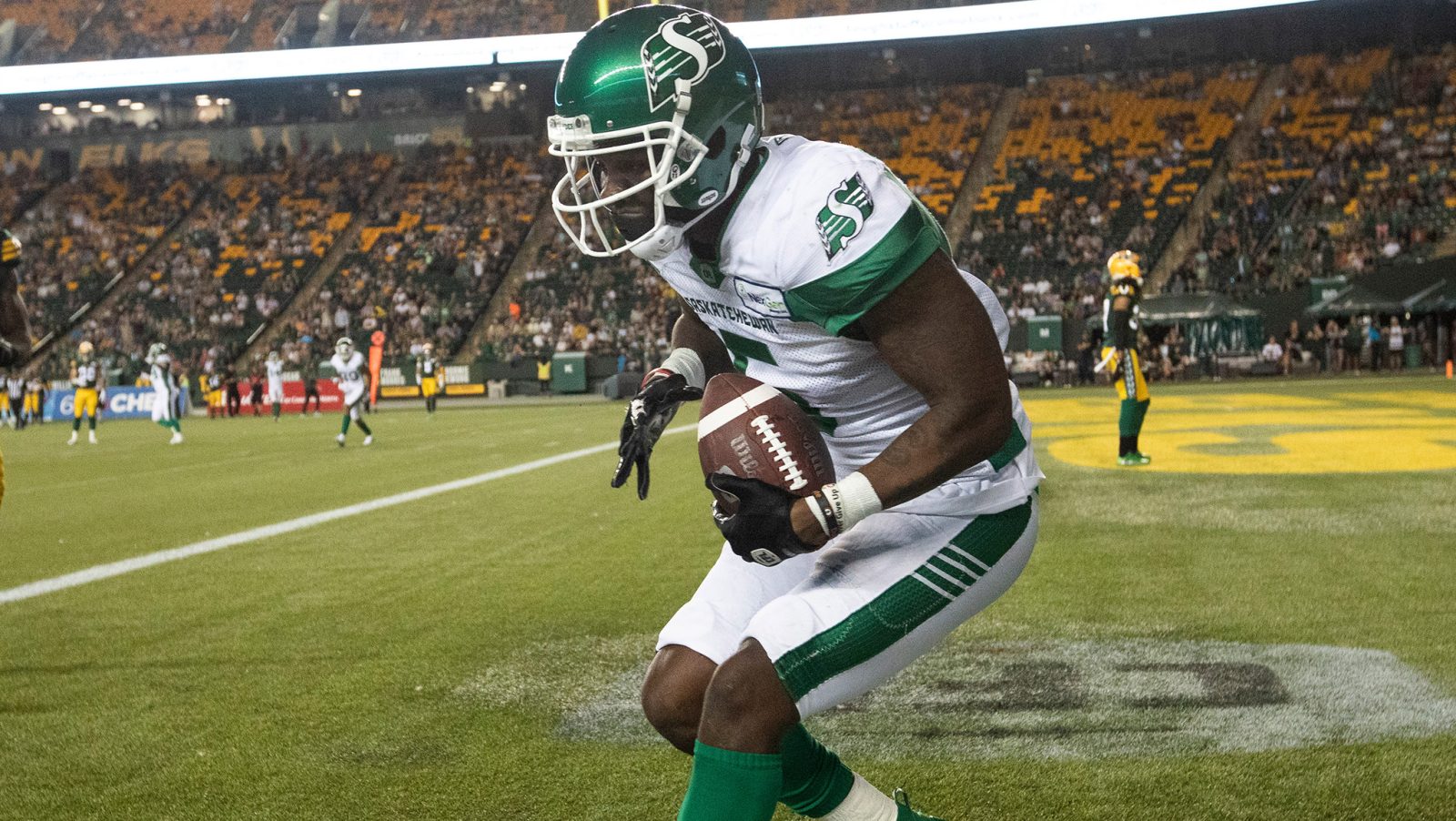 TORONTO — With Week 10 of league action firmly behind us, one thing is certain, the West Division is truly wild. The Winnipeg Blue Bombers were dethroned, Bo Levi Mitchell etched his name in Calgary Stampeders’ history, Saskatchewan Roughrider pass-catcher Duke Williams gave us possibly the best celebration of the year and BC Lions quarterback Nathan Rourke is getting very innovative at being constantly impressive.

Unfortunately as we enter Week 11, fans will have to wait for the third of four meetings between the Hamilton Tiger-Cats and the Toronto Argonauts. However, there shouldn’t be any cause for disappointment as there are a plethora of exciting storylines to follow along with before the week kicks off on Friday from TD Place in Ottawa.

– Following an electrifying 41-40 comeback win over the Calgary Stampeders in Week 10, the BC Lions had two players named as CFL Top Performers from Week 10. Quarterback Nathan Rourke and receiver Bryan Burnham were each named CFL Top Performers for their efforts in the win (CFL.ca).

– In this week’s edition of QB Index, CFL.ca’s Chris O’Leary details the poised that was on display from the Lions quarterback in their Week 10 comeback win (CFL.ca).

– BC receiver Dominique Rhymes has been having one of the best seasons of his career, catching a career-high nine touchdowns through the first 10 weeks of the CFL season. In a team media session earlier this week, the veteran pass-catcher described what has led to the offensive explosion in 2022 (BCLions.com).

– Despite a heartbreaking last second loss to BC in Week 10, it was a milestone night for Stampeders quarterback Bo Levi Mitchell as he became the all-time franchise leader in passing yards, surpassing Henry Burris (CFL.ca).

– Approaching their game with the Toronto Argonauts, Calgary head coach Dave Dickenson talks about preparing for the Boatmen and some of the familiar faces he will see on the opposing sideline (Stampeders.com).

– The Edmonton Elks added defensive depth earlier in the week when they announced the signing of American defensive back Mark McLaurin (CFL.ca).

– As Canadian university team’s open their training camps across the country, a handful of former Edmonton Elks greats have been in attendance and helping out Alberta Golden Bears on field as they prepare for the start of their season (GoElks.com).

– Following a win over the Edmonton Elks in Week 10, Saskatchewan Roughriders head coach Craig Dickenson tells team media that there is a lot of good energy within the team and going around Mosaic Stadium (Riderville.com).

– In a team media session, Riders defensive lineman Anthony Lanier II shares his thoughts on the team’s upcoming game against the BC Lions (Riderville.com).

– It may be early, but we may have already seen the best touchdown celebration of the year. Watch as Sasaktchewan receiver Duke Williams joins fans on the sidelines to celebrate his late game score (CFL.ca).

– The Winnipeg Blue Bombers were dealt their first loss of the 2022 season as they suffered a 20-17 overtime loss at the hands of the Montreal Alouettes. With no remaining undefeated team’s, see how the Winnipeg loss affected this week’s CFL Power Rankings (CFL.ca).

– The Hamilton Tiger-Cats evened the season series with the Toronto Argonauts taking a 34-27 win in Week 10. In this week’s five takeaways, CFL.ca’s  Don Landry is fired up about about seeing all three phases of Tabbies football firing on all cylinders (CFL.ca).

– According to the team’s injury report, quarterback Dane Evans was listed as a non-participant to start the week of practice in Hamilton as they prepare for their meeting with the Alouettes (CFL.ca).

– Entering the Week 1 matchup against his former team, Hamilton quarterback Matthew Shiltz tells team media he is simply trying to approach the week like it is any other game (Ticats.ca). 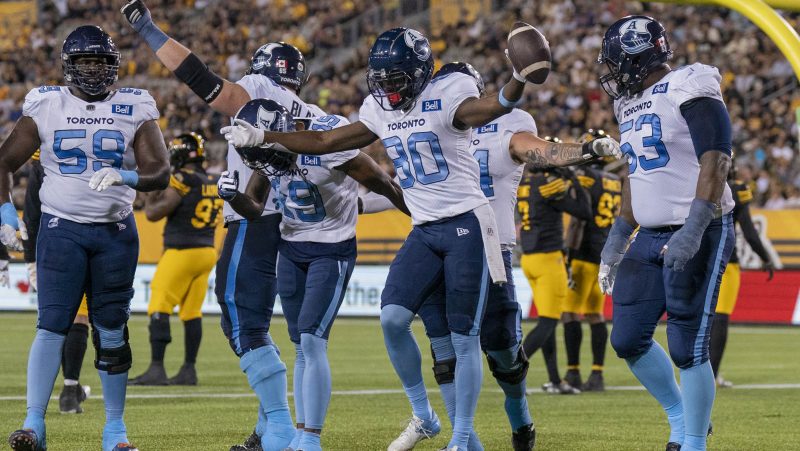 – Following their loss to the Ticats in Week 10, Toronto Argonauts’ defensive lineman Wynton McManis tells team media that he knows he’ll get another shot at Hamilton with two more games scheduled in the next three weeks, but he’s now focused on the Stampeders (Argonauts.ca).

– Argonauts newcomer, Markeith Ambles leads all Boatmen receivers in targets with 48 over first eight games of the season with the team. Argonauts.ca’s Mike Hogan outlines exactly why Ambles is fitting in so well with his new team (Argonauts.ca).

– With Week 11 of CFL action set to close out with a matchup between Toronto and Calgary, see why CFL.ca’s Jamie Nye is feeling confident about the Argos to come away with the win (CFL.ca). 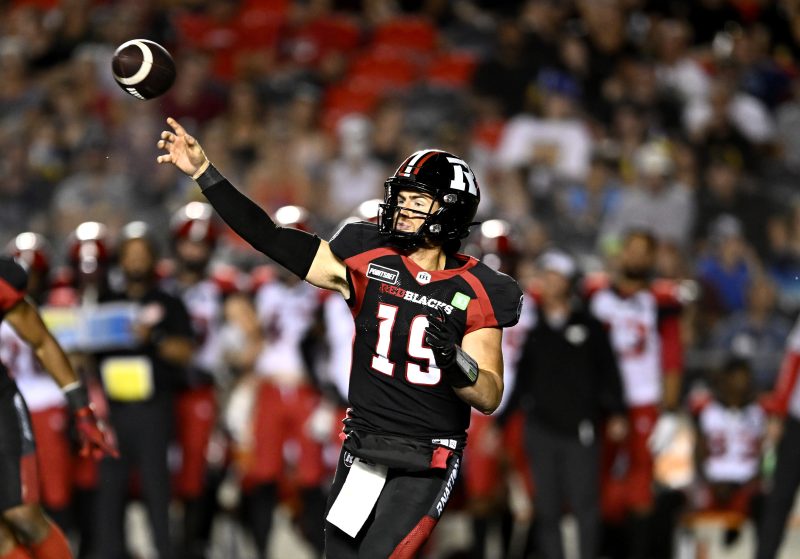 – The Ottawa REDBLACKS will open Week 11 of CFL action when they faceoff against the Edmonton Elks. The REDBLACKS will be hosting an end of summer bash and will be celebrating Pride night in their matchup against the Elks with plenty of pregame events scheduled (OttawaREDBLACKS.com).

–   Earlier this week members of the REDBLACKS organization went into the Ottawa community with an ice cream truck, serving ice cream cones and playing pickup basketball with children from the Ottawa area (CFL.ca).

– The Montreal Alouettes were the first team to defeat Winnipeg this season as they topped them 20-17 in a Week 10 overtime thriller. Montreal defensive back Wesley Sutton had five tackles, two sacks and a forced fumble in the win over the Bombers, earning CFL Top Performer honours for his contributions in the win.

– Following the win over the Blue Bombers and being named a top performer for Week 10, Sutton spoke to team media earlier this week about his team’s win (MontrealAlouettes.com).

– The Alouettes added some depth to their defensive secondary this week. The team announced they had signed former Stampeders defensive back Raheem Wilson, who started in six games for the Stamps this season before his release (CFL.ca).