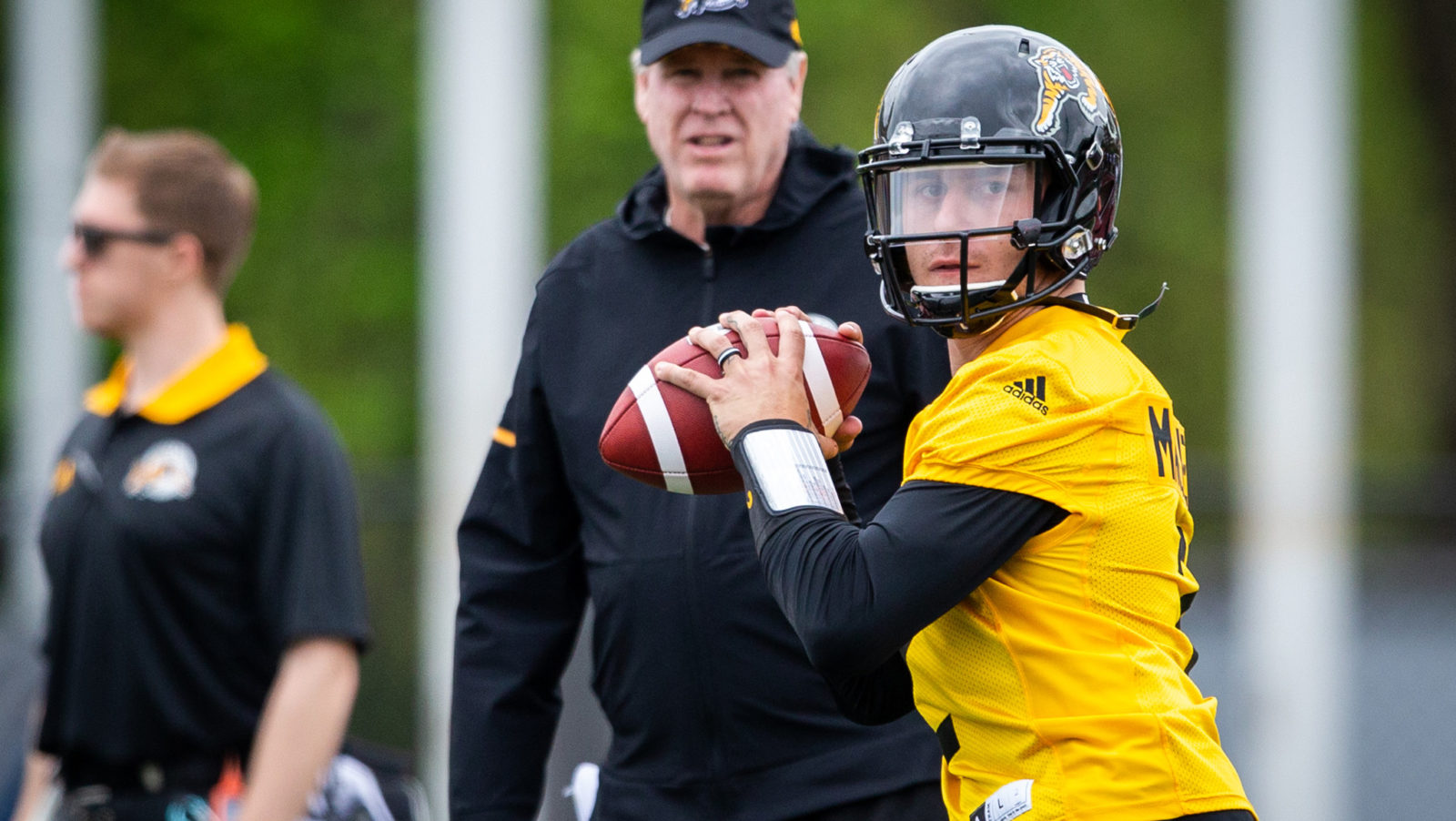 TORONTO — Another chapter in the Johnny Manziel saga opened on Sunday, when the former Texas A&M pivot was traded from the Hamilton Tiger-Cats to the Montreal Alouettes in a five-player deal.

The move comes roughly two months after Manziel signed with the Ticats, ending a year of speculation while CFL fans waited for him to arrive in the three-down game.

CFL.ca looks back on the winding path Manziel has taken since being placed on the Ticats’ neg list back in 2017.

Hamilton Tiger-Cats confirm that they have retain the exclusive rights to Manziel by adding him to their Negotiation List.

“A terrific athlete, a guy that can dunk a basketball,” stated Tiger-Cats general manager Eric Tillman at the time. “Flat-footed, has huge hands. The guy’s just Houdini with the football — just an innate ability to escape.”

Tillman went on to say that he and the Tiger-Cats thought that Manziel was a “guy that’s just electric, that could be one of the most exciting players in the Canadian Football League since Doug Flutie. He makes throws. Up here he could utilize every inch in the width of our field.”

News breaks that the Tiger-Cats had staged a workout featuring a number of players including Manziel. Rumours swirled about Manziel’s playing shape, the Ticats willingness to sign him and much more but ultimately, Hamilton stated that there was no deal imminent but were encouraged by his workout.

“Johnny did some good things,” VP of Football Operations Kent Austin said at the time. “On the field, he looked fine. It was a short workout but he’s obviously a talented kid.

The CFL issues a statement confirming that Commissioner Randy Ambrosie and Manziel had met but at that point the league was not yet ready to approve a contract for the former Texas A&M star pivot.

The statement read: “After an extensive process of due diligence and an in-person meeting with Mr. Manziel, the Commissioner has decided that he will not register any contract for Mr. Manziel for this season. However, Mr. Manziel will be eligible to sign a contract for the 2018 season and, if Mr. Manziel meets certain conditions that have been spelled out by the Commissioner, the CFL will register that contract.  The specifics of those conditions are confidential and will not be disclosed. The CFL has extended the stay on the expiry of the 10-day window for Mr. Manziel until Nov. 30, 2017 and therefore Mr. Manziel will remain on Hamilton’s negotiation list until that date.”

Manziel has releases a statement via ESPN’s Adam Schefter after the CFL confirmed that Commissioner Randy Ambrosie and the former Texas A&M star met.  In the exchange with Schefter, Manziel said he had a ‘really positive meeting’ with Ambrosie and that he is ‘ready to play’.

After signing a new contract to remain the Tiger-Cats’ head coach, June Jones (when pressed about Johnny Manziel by reporters) says that the idea of Manziel playing in Hamilton is not only still realistic but encouraging.

“I know that Kent has had some very good conversations with the agent,” Jones said at the time. “I think it’s more in their hands than our hands at this time. We still have to make a decision on that, whether he’s going to join the Hamilton Ticats or not.”

I could plug him in very, very easily. I think I worked him out twice and his arm strength is much better than I thought it was,” Jones continued. “I really think if he makes a commitment to come up here for three or four years that he’ll write his own ticket if he wants to go play in the NFL again. It’ll be a Warren Moon situation, to be quite honest. I think he has the potential to be a great football player.”

The Manziel-to-Hamilton chatter continues as Jones tells James Cybulski of The Waggle Podcast that he thinks that the former Cleveland Brown would be ‘the best player to ever play up here’.  The comments created significant debate from CFL followers across the country, leaving no shortage of storylines surrounding the Ticats QB situation.

CFL commissioner Randy Ambrosie tells ESPN that the league and Manziel are in a holding pattern and “awaiting the results of a multi-faceted expert analysis before deciding whether to approve him for play in the league.”

Ambrosie also spoke on the meeting he and Manziel had last September and said, “(Manziel) represented himself incredibly well [in the meeting]. He was thoughtful. I found him to be authentic and sincere. I also felt like he seems to have come to a good place in his life. He was talking a lot about his family. Now, I should say that’s part of the problem. My bias is towards family. So when I’m with somebody in there talking about my family, immediately I feel good about the conversation.”

CFL announces that Ambrosie and the league would approve a contract for Manziel should one be negotiated. A portion of the league-issued statement said the process has “included an ongoing assessment by an independent expert on the issue of violence against women, a review by legal counsel, and an in-person interview of Mr. Manziel conducted by the Commissioner. As well, Mr. Manziel has been required to meet a number of conditions set by the league.

“As a result of this process, the Commissioner has now informed Mr. Manziel and the Tiger-Cats he is prepared to approve a contract for Mr. Manziel should one be negotiated.”

Johnny Manziel and his agent, Erik Burkhardt, release a statement announcing a Jan. 31 deadline for a contract to be signed. The Ticats announce that a contract offer has been made to Manziel inside the opening of the 10-day window, and that negotiations will continue.

“Due to Johnny’s strong relationship with Coach Jones and Hamilton executive Kent Austin, we’ve made the decision to deal exclusively with Hamilton and give them until January 31st to work out a fair deal to make him their Quarterback,” read the statement.

“So that there will not be any ambiguity in regards to financial expectations, and so the public understands how seriously Johnny is considering this move, I will tell you that we believe ‘fair deal’ means on par with what Hamilton has paid their QB in recent years, despite not having much on-field success. If we cannot reach a deal with Hamilton by this date, we will turn our focus to several other professional options readily available to us.”

After a brief period of silence, Johnny Manziel is back in the news when June Jones sends out a cryptic tweet just days ahead of Manziel’s self-imposed signing deadline.

“Back in the Hammer!!!” Jones tweeted. “Excited about 2018!!…this week is going to be the one that sets the stage for a Grey Cup run…..decisions on many things that will get us there….including Manziel…everyone is on board and team decision!!!”

The self-imposed Jan. 31 deadline set by Johnny Manziel and his agent passes with no deal. The Ticats confirm that no deal is imminent between the two sides, while TSN’s Farhan Lalji reports the two sides are far apart in negotiations.

“While the discussions with Johnny Manziel and his representative have been very cordial and informative, there is nothing imminent and nothing to report,” the Ticats said in a statement. “We will continue to do our due diligence and will have no further public comment on the matter as we move forward.”

Another chapter is added to the Manziel saga when the Ticats’ neg list quarterback announces he’s joining a two-week professional football league called The Spring League.

Some wonder whether it will spell an end to Manziel’s possible future in the three-down game.

Kent Austin confirms that the Ticats are still keeping close tabs on Manziel, and will attend the quarterback’s spring league games in Austin, Tex.

“It’s a very short stint for these exhibitions and they’ll be over very, very quickly,” said Austin. “You’ll probably see things move pretty quickly after that, in some direction.

“He’s doing well,” Austin added. “He’s worked out, he’s been working out with NFL guys for some time now prior to going down to Texas. It’s all in line. From the information that you already have, there’s nothing different from that right now.”

At a pro day at Texas A&M, Johnny Manziel answers questions about his football future and confirms that if he can’t get an NFL opportunity, he’ll sign in the CFL.

“It’s going to be fun to see how everything plays out,” Manziel said in an exclusive interview with TSN’s Dave Naylor. “I’m sitting here today just as curious and with just as many question marks as you. I can sit here today and say I’m happy, I feel like I’m doing really well in life. I’m learning things as I go but I feel like I have a good regimen and a good foundation for what I want to do moving forward.”

Johnny Manziel makes his spring league debut, completing eight of 16 passes for 76 yards and a touchdown in a losing effort. Manziel would play is second and final game the following Thursday on April 12.

With the spring league concluded, the waiting game begins for Manziel and the Ticats.

A blockbuster trade raises a few eyebrows when the Ticats include an unnamed neg list player in a trade for the first overall draft pick. However, Ticats head coach June Jones confirms shortly after that Johnny Manziel’s rights are not part of the deal with Montreal.

Outside of that, all remains quiet on the Manziel front as the 2018 CFL Draft passes.

Johnny Manziel tweets that he’s signed with the Hamilton Tiger-Cats, ending a year of speculation since it was revealed he was on the team’s negotiation list. The news comes the day before training camp, with the veterans set to report and join the team in Hamilton.

Roughly two months after arriving in Hamilton, Manziel is traded to the Montreal Alouettes in a blockbuster five-player deal. Jamaal Westerman and Chris Williams go to Hamilton along with two first-round picks, while the Ticats send Tony Washington and Landon Rice along with Manziel to Montreal.