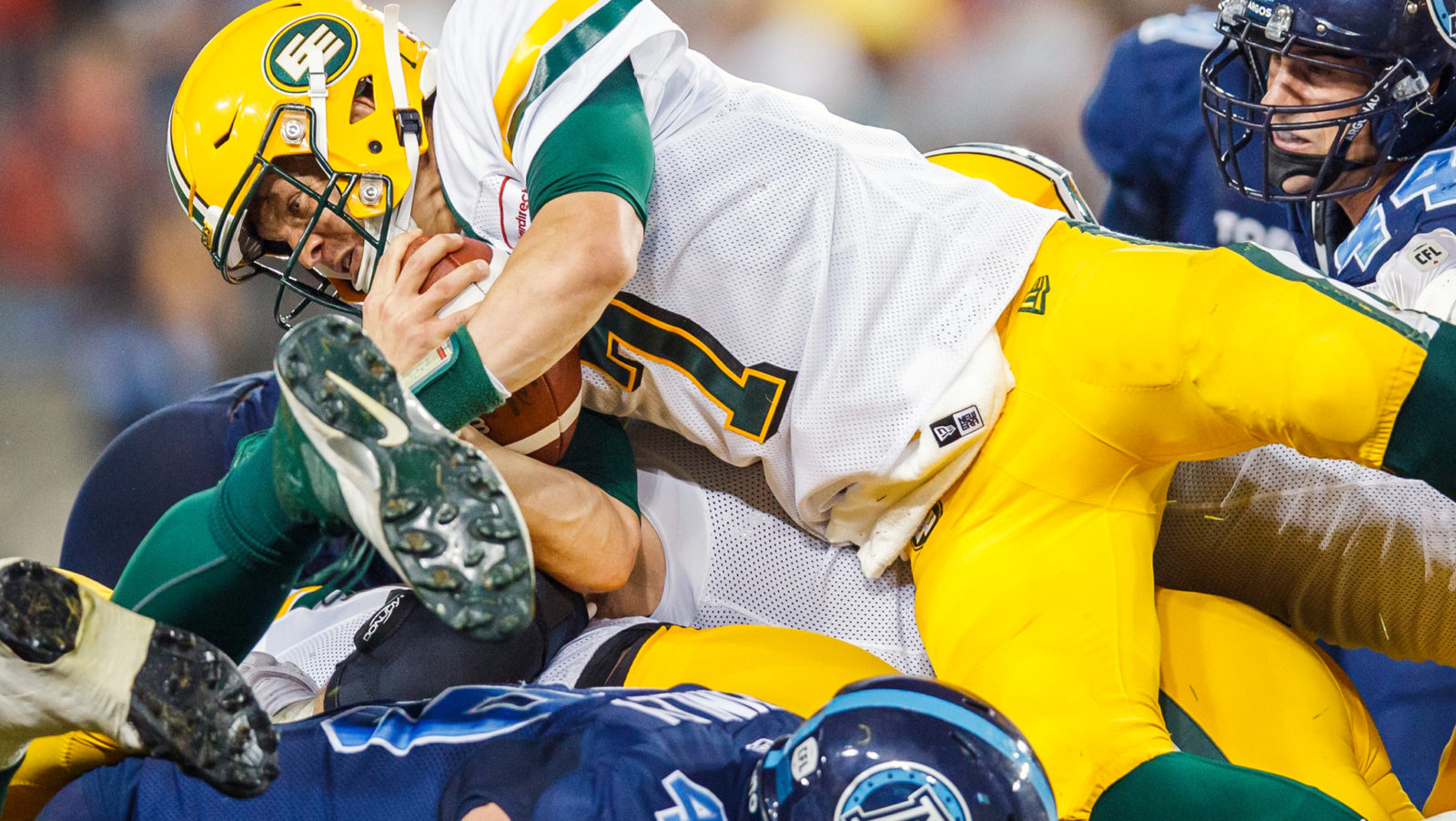 TORONTO — Not only did the Edmonton Eskimos miss the playoffs in their Grey Cup host season in 2018, they also had to watch their most hated rival win it on their turf.

As the playoff picture begins to reveal itself, the Green and Gold are hoping for a reversal of fate this season. With the Eskimos cruising, and their top competition in Calgary and Winnipeg facing quarterback injuries, has the door opened wide for the Esks to win the West?

There’s plenty of reason to believe it. Not only do they boast the CFL’s top defence through 10 weeks, the Eskimos also deploy league’s most impressive attack, led by Trevor Harris, C.J. Gable and a trio of dynamic pass-catchers.

It was all on full display over the weekend, when Harris piled up 420 passing yards and five total touchdowns while carving up the Argos’ defence on the road. Harris, by the way, has been sacked just three times this season, while his 13:2 touchdown to interception ratio leads the CFL.

Are the Eskimos becoming the team to beat in the CFL? More in the Nissan Titan Power Rankings.

There’s plenty to like in Winnipeg, even with Matt Nichols now on the shelf. Marcus Sayles has become a dominant DB while rookie Jonathan Kongbo is making teams regret not choosing him in the draft back in May. Now, can Chris Streveler deliver as one of the league’s most hyped quarterback prospects?

The CFL’s best team on paper continues to roll, most recently putting up 508 net yards in a road win over the Argos. Led by the three-headed monster of Greg Ellingson, DaVaris Daniels and Ricky Collins, the Eskimos’ passing attack is the league’s most feared through 10 weeks of the season.

Defence carried the Ticats to victory in Week 10, keeping the REDBLACKS out of the end zone while holding their quarterbacks to a 47.8 completion percentage. Bralon Addison and Brandon Banks form a dynamic duo on offence, but the pressure rests on backup pivot Dane Evans to continue progressing.

In one of the more remarkable endings to a football game in recent memory, the Alouettes stormed back with two late scores and an onside kick to force overtime, eventually coming out on top vs. the Stamps. Just like in Week 10, there’s no reason to count Montreal out in the race for first in the East.

It was a tough weekend for the Stamps, who not only lost their second straight game but also learned that injured starter Bo Levi Mitchell isn’t ready to return. The bye week comes at just the right time, as Dave Dickenson’s team looks to refocus ahead of a critical home-and-home with the rival Eskimos.

With the CFL’s second-ranked offence through the first half of the season, the Riders have a new, pass-happy identity led by the trio of Cody Fajardo, Shaq Evans and Kyran Moore. It’ll be interesting to see how they stack up with the rest of the contenders in the West — but first, they can’t overlook the struggling REDBLACKS.

Despite losing on Friday, the Argos held their own in back-to-back games against the CFL’s best. McLeod Bethel-Thompson has thrown five touchdowns and no interceptions his last two games, while Brandon Burks has supplanted James Wilder Jr. on the running back depth chart. A virtual must-win vs. the Als awaits in Moncton, N.B.

The early-season magic has run out in the nation’s capital, where Lewis Ward‘s consecutive field goal streak is over while the REDBLACKS have lost six of their last seven games. The defence has done its job the last two weeks, but the quarterback position continues to cause problems for an offence that’s scored just one touchdown the last two games.

The Lions’ offence took a step back in Week 10, compiling just 217 yards of offence while turning the ball over six times in a loss to the Bombers. Mike Reilly was sacked seven times. With a 1-8 record and four games out of a playoff spot, there isn’t much to be optimistic about right now in BC.