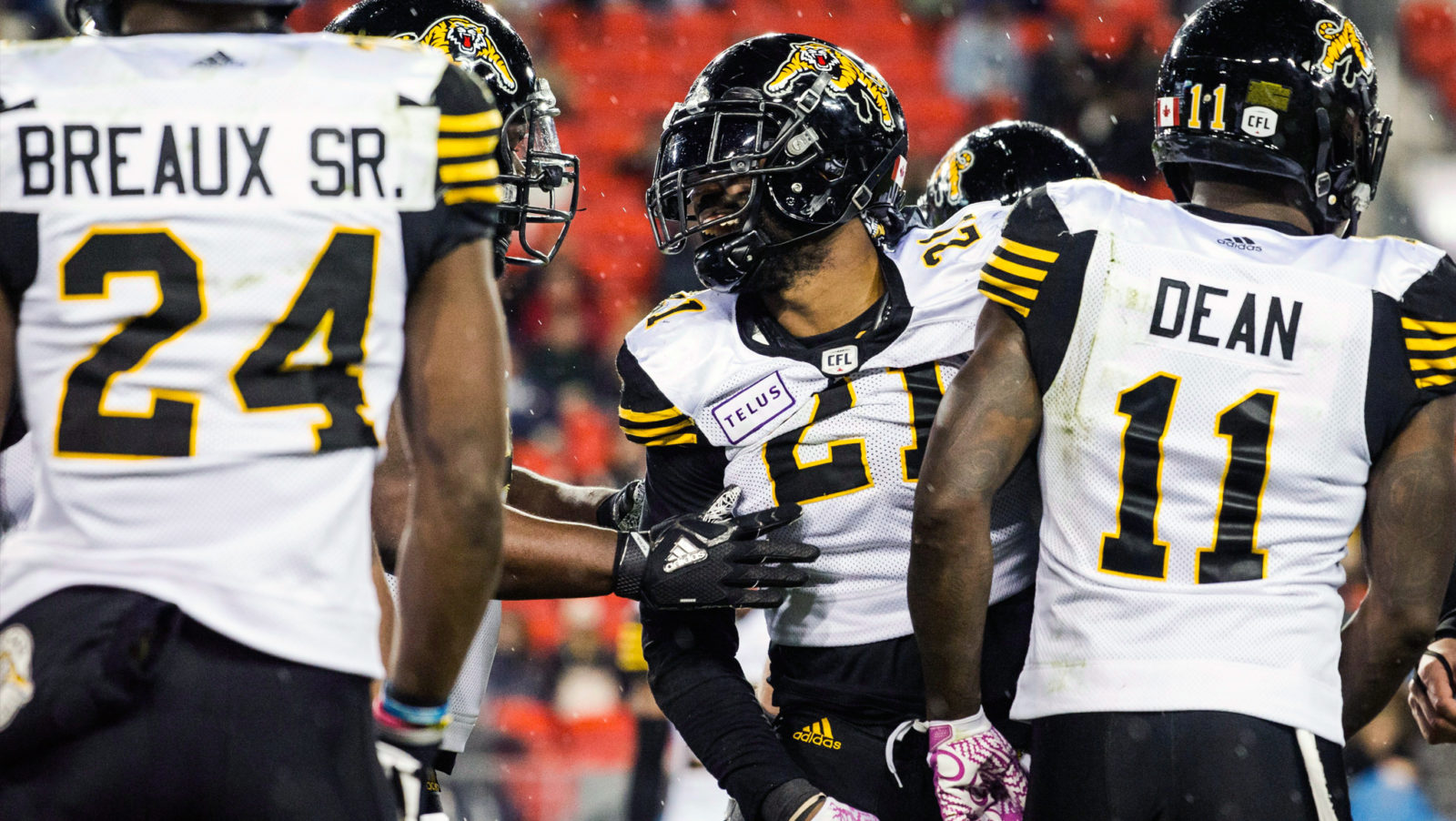 TORONTO — Are the Hamilton Tiger-Cats the best team in the CFL?

After quietly climbing the Nissan Titan Power Rankings the last two months, the Ticats reached the summit this week when they took over the No. 1 spot for the first time, ending the Calgary Stampeders’ 19-week reign as the league’s most dominant powerhouse.

Suddenly, despite a record of only one game above .500, the Ticats are becoming a trendy pick to win the Grey Cup in November — but is it warranted?

Elsewhere, the Lions and Bombers are officially the two hottest teams in the three-down game, while the Riders are trending in the wrong direction after a one-sided loss.

With wins in five of their last seven and the CFL’s top-ranked offence, the underlying numbers support the Hamilton hype machine. Jeremiah Masoli looks like a legitimate MOP candidate, while Terrell Sinkfield adds another dynamic weapon to June Jones’ run and shoot offence. An upcoming home-and-home with Ottawa will decide first in the East Division.

It hardly seems fair that the Stampeders, four wins clear of the East-leading Ticats, fall from top spot after losing for just the third time this season. But there’s actual cause for concern in Cow Town, with Bo Levi Mitchell coming off his two worst games of the season and an offence that’s in a slump. Have injuries finally caught up?

Four straight wins have turned panic into euphoria for the Blue Bombers fans, with their team coming off a 31-0 shellacking of hated rival Saskatchewan. The Bombers aren’t just beating their opponents, they’re obliterating them, as five of their nine wins have come by 20-plus points. A home playoff game remains well within reach.

The Lions exorcised their road demons over the weekend, picking up just their second ‘W’ away from BC Place this season. The win at McMahon seems surprising, but the Lions have been trending in the right direction for a while, now winning five of their last six. With Travis Lulay back in the fold and Tyrell Sutton sparking the run game, the Lions have the look of a dark horse.

Perhaps the Eskimos’ struggles were a little exaggerated? The Esks’ offence exploded for 541 yards over the weekend, dominating the REDBLACKS in nearly every aspect on the way to a 34-16 win. If this version of the Eskimos shows up every week, Mike Reilly‘s team will not only make the post-season but will be playing late in November.

It’s been a frustrating up-and-down season in the nation’s capital, with the latest chapter coming on Saturday when the REDBLACKS were shut out in the second half in Edmonton. The talent is there, but Trevor Harris and co. just haven’t been able to string together wins on a consistent basis. The East is on the line with a Hamilton home-and-home on tap.

After wins in seven of eight, the Riders crashed hard in Week 18, being shut out 31-0 by the rival Bombers. Grey Cup contenders don’t lose like this in October. Dropping them to seventh may seem harsh, but there’s little faith in the offence or quarterback Zach Collaros, who’s thrown more interceptions (13) than touchdowns (9) in his first year in Riderville.

The Alouettes continue to look towards 2019, moving top offensive lineman Philip Blake and national linebacker Chris Ackie for draft picks at the deadline. All eyes will be on first-year quarterback Johnny Manziel the final few weeks, as he looks to continue his progress and generate some excitement for the Alouette fan base heading into the off-season.

A season sweep at the hands of the Ticats underlines what’s been a forgettable season for the defending Grey Cup Champions. The Argos have struggled in every aspect, with questions across the board from their coaching staff to the quarterback. Three weeks left to show something positive.

Fan Poll
Do the Ticats deserve to be #1 in the power rankings?
Yes
Vote
No
Vote
Submit View Poll Results