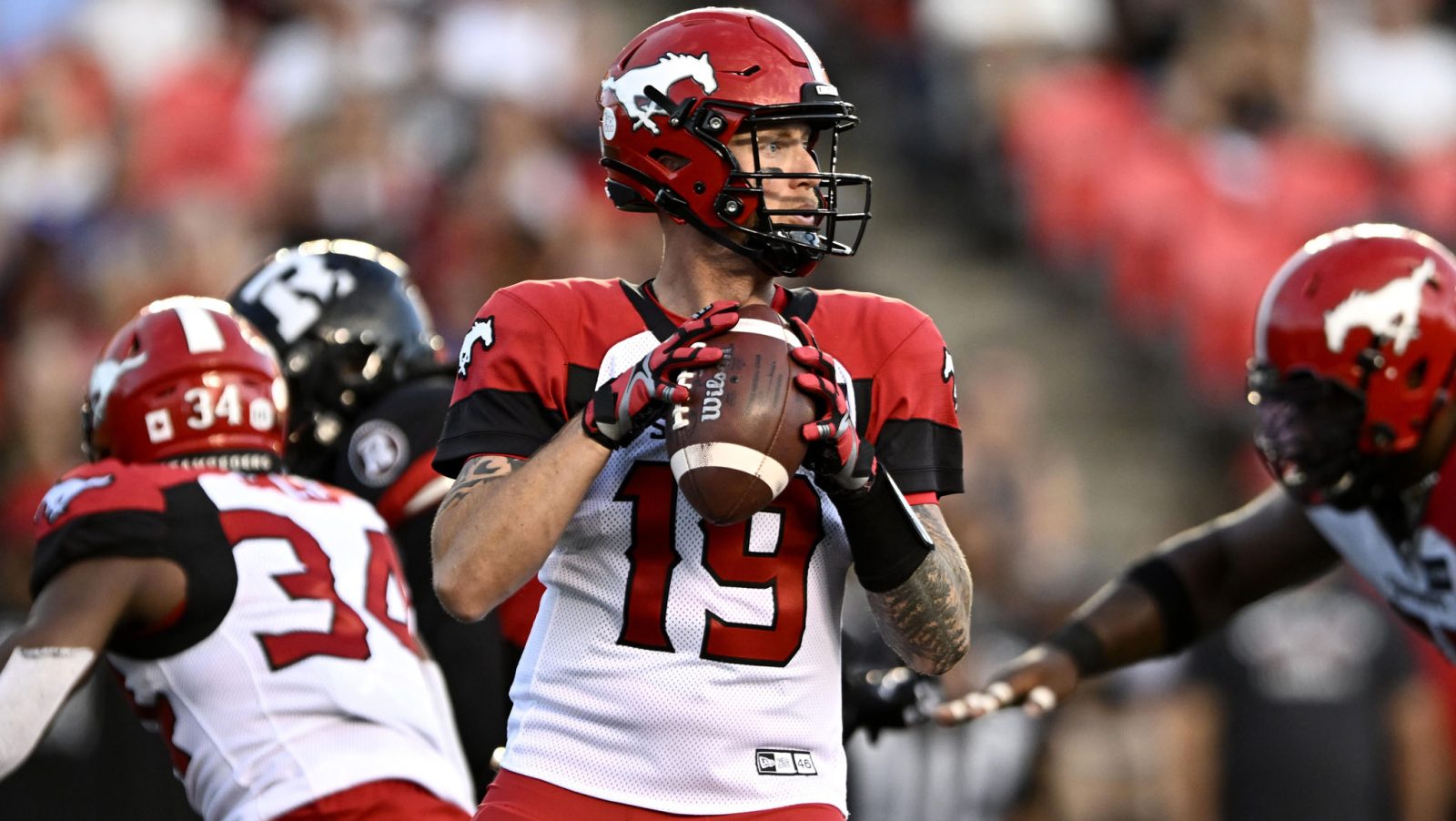 TORONTO — We’ve got a strong game of the week contender in Calgary.

For the first time as a starter, Nathan Rourke will lead the BC Lions into Calgary to face Bo Levi Mitchell and the Stampeders.

Rourke is of course coming off of a record-setting game (where he broke the record he previously set) for passing yards by a Canadian quarterback. His Lions are now 6-1, trailing only the mighty Winnipeg Blue Bombers in the standings. The Stamps aren’t quite on the level yet that we’ve seen them in past years, but they’ve been playing at a high one in 2022 and gave those Bombers a pair of very tough games, which have provided their only losses this season.

The Bombers are once again the class of the league, sitting at 9-0, daring the other eight teams in the league to try to take a win, or the Grey Cup they’ve won the past two seasons from them. We know how that so far perfectly told story is going.

This Lions-Stamps game is all kinds of intriguing and given the Bombers’ dominance this year could be a preview of the Western Semi-Final. On a less important scale, it can also give some clarity on the No. 2 spot in our power rankings. For now, the Lions are holding on to it. A Calgary win this would would no doubt shake things up for this time next week.

Another week, another upgrade to history unfolding in front of us. At 9-0, the Bombers are now off to the seventh-best start to a season we’ve ever seen from a team. Keep in mind that this is a league with over a century of history to it and what the Bombers are doing almost becomes overwhelming. In their dominant streak, there have been some masterful performances and a few like what we saw this past week against Montreal, where the Bombers have grinded through some less-than-pretty games but found ways to win. The team’s ability to find those wins — look at how they’ve closed against Edmonton, Calgary and Montreal — shows a completeness and an undying belief in one another. This week’s mission: Pick up win No. 10 against the Alouettes and finally enjoy their first bye of the season.

We wonder, just what will Nathan Rourke‘s best CFL performance look like? TSN’s Matt Dunigan had a little fear in him at halftime on Saturday night, when Rourke was on pace to take a run at Dunigan’s single-game passing record of 713 yards. Through their two previous meetings Rourke has racked up 759 passing yards against the Edmonton Elks in a pair of blowout wins. Unfortunately for Rourke/fortunately for the Elks, they’re scheduled to meet just one more time this season, on Oct. 21 at Commonwealth Stadium. Up next for Rourke and the Lions is that promising showdown with the Stamps on Saturday.

The Stampeders were fortunate to have some strong defensive play lift them over the Ottawa REDBLACKS. That can be enough to get them past a team that’s struggling to find its way in something of a tumultuous season; it likely won’t be enough this week against a team like the visiting BC Lions. The Stamps are more than capable of that complete game and we’ve seen flashes of it through the first nine weeks of the season. Remember the comments out of the Stamps-Bombers game in Week 8, on how well it was played, how clean and quick? This week’s Calgary-BC game has the same sort of feel going into it.

The Argos have taken the first game in what promises to be a gruelling four games in five weeks set against the Ticats with a very strong second-half showing that had bursts from all three phases. The win lets the Argos jump up in the rankings but as we touched on last week, once you get past that 1-2-3 punch in this list, there can be a lot of room for movement on a week-to-week basis. As we’ve also said in this space in the past, consistency would help the Argos start to work their way into that upper echelon conversation. Let’s see how things go in Hamilton this week. This is a great chance for the Argos to create some separation in the standings, while pushing their arch-rivals toward the cellar.

We try not to move teams coming off of a bye week, but given that the Argos have topped the Riders twice this season and now have a better winning percentage, the move is warranted. The week off hopefully helped the Riders heal up and start to take steps to get their season back on track. They get a Green and Golden opportunity in Edmonton this week, where the Elks’ winless streak at Commonwealth Stadium now sits at 10 games, going back to the 2021 season. There’s pressure in every week, but dropping one to an Edmonton team that’s not that far behind them in the standings, given their at-home troubles could lead to the panic button getting a workout in Regina.

The Ticats’ loss to the Argos leads to them both yo-yoing in the rankings. Just as impressive as the Argos’ second half was on Saturday at BMO Field, the Ticats’ disappearance was equally disappointing. The Ticats are saved by the struggles of their East Division counterparts. Montreal and Ottawa’s losses have kept the 2-6 Ticats in second place in the East Division, but they know that they can’t rely on something like that through their final 10 games if they want to make playoff noise in November. The numbers will say that this isn’t a must-win game, but getting some momentum back both in this series with the Argos and in their season overall would do them a lot of good. A win would also keep first in the East within sight, as unlikely as that seems given how things have gone this year in The Hammer.

It’s not often you’ll see a team fall to 2-6 and see them move up in the rankings. We’ll give the Alouettes this: they fought tooth-and-nail with a first-place Bombers team and went into the fourth quarter tied up with them. The wheels fell off in the fourth quarter, but there are a lot of scattered wheels in different teams’ colours in the rubble of the Bombers’ success this year. The bump up in the rankings is also a byproduct of the struggles of the teams around them. Things don’t get any easier for the Als this week. They get the least desirable home-and-home opponent in the league, as they travel to IG Field to see the Bombers again on Thursday.

We may not have expected an Elks win at BC Place on Saturday night, but given the Elks’ improved play since that Week 1 crash-and-burn against the Lions, it was fair to expect a closer game. The Lions had other plans. Nathan Rourke was exceptional once again, leaving Edmonton GM and head coach Chris Jones as complimentary of a rival player as you might ever hear him (jump to the 2:50 mark). On the heels of that blowout loss to the Lions, Jones and the Elks head home where they seek their first win at Commonwealth against a Riders team that they played well against in Week 2, oddly enough right after they were dismantled by the Lions to open their season. They’ve put bad losses behind them in short order earlier this season. They’ll have to do it again this week.

The REDBLACKS took a frustrating loss against the Stampeders by struggling more on offence than their guests did. We got our heaviest dose yet of Nick Arbuckle in a REDBLACKS uniform and while there was some movement with the offence, it wasn’t enough. The team will use its bye week to rest up and try to find a way to maximize the talent on this roster. Could we see the shift from Caleb Evans at QB to Arbuckle when the REDBLACKS host the Elks in Week 11? As the midpoint of the season nears, head coach Paul LaPolice will no doubt explore all of his options at every position.