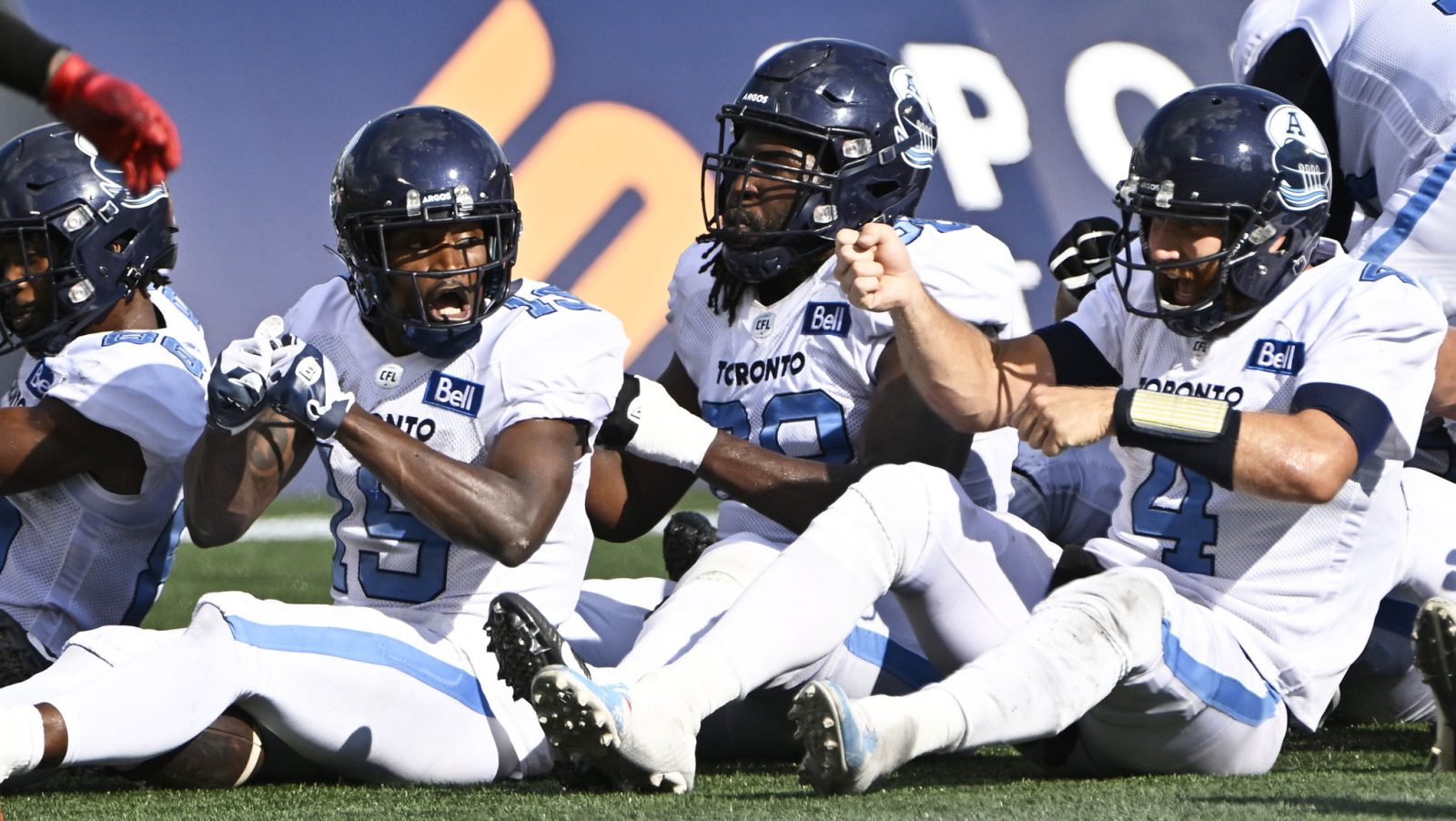 TORONTO — It wasn’t the prettiest of wins, but it has moved the needle for the Toronto Argonauts.

The story of the Argos’ season to this point has been their consistency. Sometimes that’s from half-to-half in a game, other times it’s week-to-week. That’s been reflected in their place in these rankings, where they haven’t cracked the top-three since Week 2 of the season. On the heels of their win over the Ottawa REDBLACKS and taking three out of four against the Hamilton Tiger-Cats, the Argos are sitting somewhat comfortably at the top of the East Division and are back in the upper echelon of the Power Rankings.

Of course, the BC Lions have something to do with that. The team is languishing in the wake of the loss of Nathan Rourke, falling to 0-2 without him this season, after losses to the Saskatchewan Roughriders and the Montreal Alouettes. The Lions’ short slide without their MOP candidate certainly greased the wheels for the Argos’ move up.

Meanwhile, there’s no arguing about the top spot, which has been unchanged this year. The Winnipeg Blue Bombers are the class of the league and they seem to find different ways to show us how on a weekly basis.

You can guess where the Bombers are. Check out the rest of the CFL.ca Power Rankings below.

The Bombers are a team that’s found a variety of ways to win this year. In their Labour Day rematch with the Saskatchewan Roughriders, Zach Collaros and Co. turned the game into a track meet and ran away with it. Collaros was a tidy 21-25 for 273 yards with four touchdowns and zero interceptions, as the Bombers’ new win streak grew to three. Some love to the Bombers’ defence is due here too. The Riders managed 251 total yards of offence and the Bombers picked up four sacks in the decisive win. The team and organization’s heartfelt farewell to TSN’s Sara Orlesky was a cherry on the cake of a perfect day at IG Field.

There was much discussion on the TSN panel on Saturday night — perhaps aided by a pair of blowout games to wrap up a triple-header — about who the second-best team in the CFL is. We’ll continue to make the point we’ve been making for three weeks now and say that it’s the Stampeders. Jake Maier led the Stamps back to Edmonton for their Labour Day rematch game and helped hand the Elks a very similar result to what Bo Levi Mitchell helped orchestrate back in Week 5, when the visitors galloped out of Commonwealth with a 49-6 win. The Stamps head into the next two weeks with a shot at the second-best record in the West, as they have the BC Lions on deck for a home-and-home series.

The Argos batted the Ottawa REDBLACKS away on Saturday with a 24-19 win and for now, have made it a two-team race in the East Division between themselves and the Alouettes. The Argos get their final bye week of the season and will come out of it to see the REDBLACKS once again, giving them a chance to provide some clarity — and dominance for themselves — in an East Division that to this point has been up for grabs despite three of the four teams sitting under .500. How about Argos’ receiver Kurleigh Gittens Jr.? The Ottawa native returned to his hometown and put up a career-best 161 yards and a touchdown in a win.

The Lions certainly didn’t look like the team that was breathing down the necks of the Winnipeg Blue Bombers a few weeks ago, but their quarterback situation explains essentially all of their woes. Lions’ head coach Rick Campbell said after his team’s 31-10 loss to the Alouettes that neither third-stringer Antonio Pipkin nor the recently-acquired Vernon Adams Jr. had seen the field (Pipkin) or the playbook (Adams) enough to be able to make an impact. It’s a lot to ask of a quarterback to absorb a new playbook and make an impact on the field in a week, but how about over two weeks? The Lions’ grip on second in the West is at stake as they get set to meet the Stamps for a pair of games over the next two weeks.

We’ll give you a grain of salt in the Riders’ blowout loss from Saturday: At least it was to the league-leading Bombers, who sent a reminder to everyone that if you’re not on their level for 60 minutes, it can get ugly. It was ugly in the Riders’ locker room, too, with a flu bug hitting players and coaches right up to kickoff and no doubt impacting the team’s performance on the field. Still the Riders dip down under .500 again and currently sit just four points out of the playoff chase in the West with Calgary and BC. A crossover feels more likely by the week and the Riders are fitting the bill for a trip East come November. Wherever this season takes them, they’ll have to clean up two of the same things that have hurt them all year. They gave up four sacks to the Bombers on Saturday and took 13 penalties for 141 yards. Regardless of who you’re playing, that makes winning difficult.

The Als put their disappointing loss to the REDBLACKS behind them with a strong defensive showing against the Lions. That defence reaped the benefits of recent additions Tyler Costigan (one sack, one forced fumble and recovery) and Nafees Lyon (two tackles, one on special teams and an interception), with Lyon putting the game on ice with his late pick-six on Pipkin. Montreal’s defensive line got through for five sacks on the night, had five pass knockdowns and three fumble returns. They’ll come out of their bye week to host the Hamilton Tiger-Cats in Week 16.

The REDBLACKS had a shot at upending the Argos on a day where they put up 391 yards as an offence but struggled to find the end zone, with just one rushing TD. Their loss to the Argos drops them to the bottom of the East, by virtue of having lost to Hamilton in Week 6. The ground can still be made up for a playoff race, but with each week and each loss, the line to that destination becomes a little bit finer. The REDBLACKS get another shot at the Argos once they come out of their bye week. It’s not a win-or-else situation, mathematically, but wins are needed if the REDBLACKS want to extend their season.

The Elks’ concerning pattern of fluctuating between playing a good, competitive game and unravelling en route to a lopsided loss continues. As Chris Jones’ team patches itself up and gets ready for Week 15, they get a Roughriders’ team that while they haven’t defeated yet this season, they’ve played well against. To the Elks’ credit, they seem to have been able to compartmentalize their bigger losses well this season and haven’t let the negative energy carry over on a week-to-week basis. A 3-4 team on the road, the Elks are not a team to be taken lightly this week.

The Ticats come out of a bye and will hope that Dane Evans is healed up enough to get on the field and try to help his team get out of hole it’s fallen into this season. If the quarterbacking situation hasn’t changed this week, the Ticats are back where they were when they stepped onto the field on Labour Day. They’ll need a Herculean effort from special teams and their defence, especially with the Bombers on their way into town on Saturday.